I’m still alive, I swear! Turns out trying to secretly finish up a birthday quilt, getting the house ready for a birthday party, and having Jack home during spring break is a bit of a buzz kill for my posting schedule! Every time I sat down to start a post, there were thousands of stitches to tear out of my quilt (more on that later), pizzas to make and freeze, or someone climbing on me.

I had planned to have Jack’s quilt finished up on Tuesday night, but after attaching three of four sides of the front to the back piece, I made a horrible discovery. The back fabric is a super slippery/fluffy blanket from Target. We have a king sized version of this blanket that Jack loves and drags around to snuggle up with on the couch during Jeopardy. I thought it would be the perfect quilt back.

I was an idiot.

I could not keep that damn blanket from slipping and it just would not align properly. When I had three sizes attached, I realized the seams were bubbled and totally off. By this time, it was about 9:30 pm, and I realized I was not emotionally ready to deal with undoing hours worth of work. I shoved the quilt in my sewing closet, went upstairs to have a no bake cookie, sulked, and went to bed. I also posted this to Facebook and Instagram.

I spent Bennett’s next few nap times as well as once everyone was in bed, ripping out seams. I finally got it detached, and then pinned the living shit out of that thing so we wouldn’t have repeat when I went to sew it back on. Screw you quilt – I win. I’m twice as smart as you. 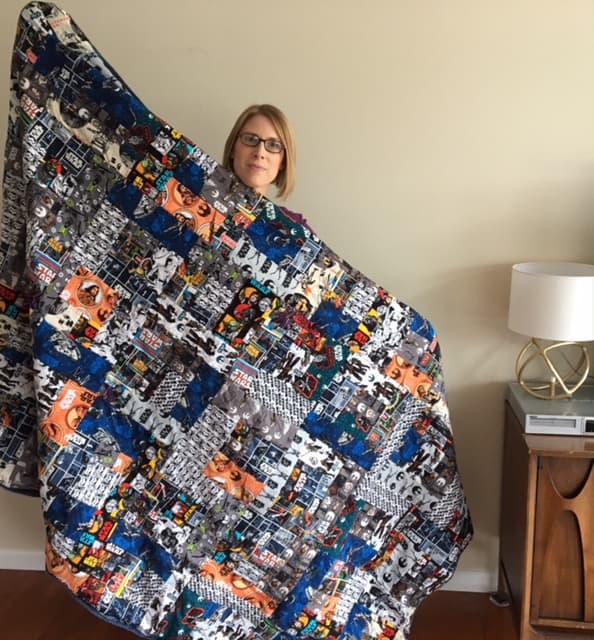 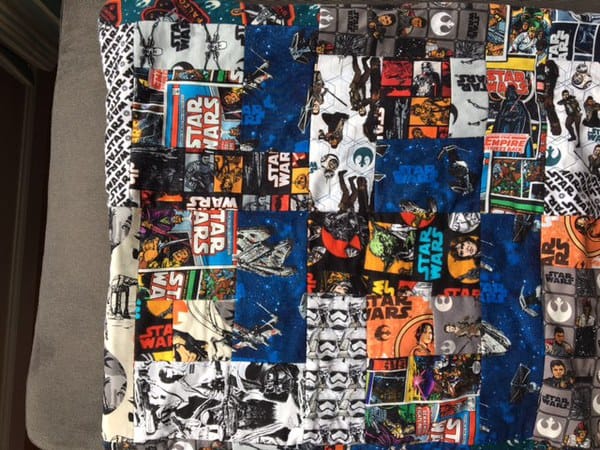 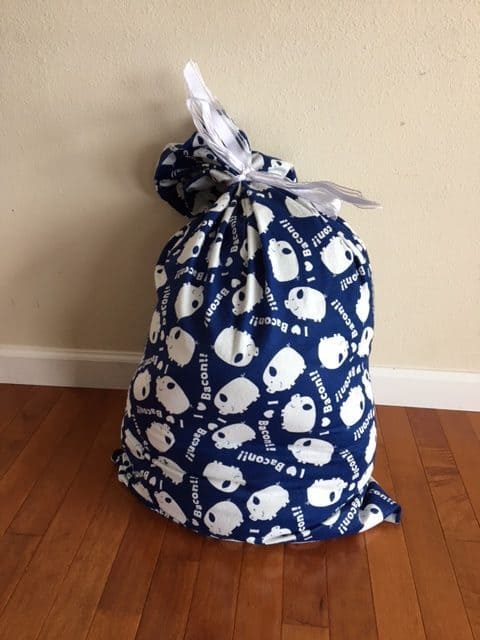 Jack had a great time at his kid party, and said it was the best birthday ever. We took a few friends to $5 movies – Boss Baby – and then frozen yogurt afterwards. We realized we hadn’t talked about yogurt sizes beforehand, and when we all there Troy said “should we give the kids the big cups”? I was reaching for the smaller cups as he said this in front of the kids. Ugh. Thank goodness the fro yo place asked if we wanted the birthday party discount, because some of those kids piled on so many toppings. Also, who says no to the birthday party discount???

This week Troy also worked on a garden project we have talked about for years. The area around our three planting beds was sparse gravel that always was covered in weeds. I would pile straw on there throughout the year, but the weeds were vicious and unrelenting. We had always kicked around the idea of putting down pea gravel, but the garden budget would inevitably get eaten up with other projects, and I assumed pea gravel was crazy expensive. Costco had a giant roll of landscaping cloth for $24 this year, and with that kind of pricing, I couldn’t stop thinking about fixing up this eyesore of our garden. When I called around for gravel estimates, I was shocked we could cover the entire area for $13. Thirteen freaking dollars. Lesson learned – make a few calls before deciding a project is not in your reach. 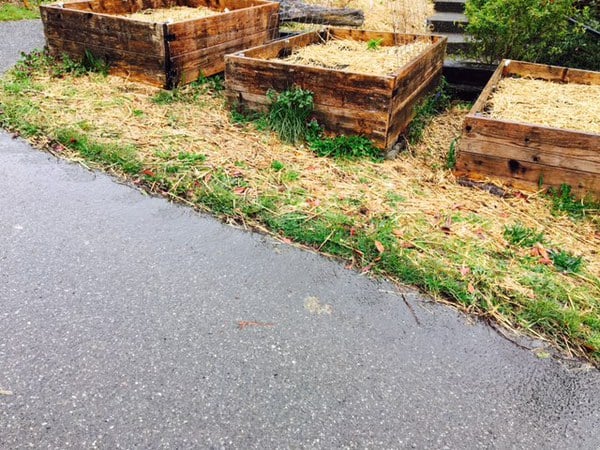 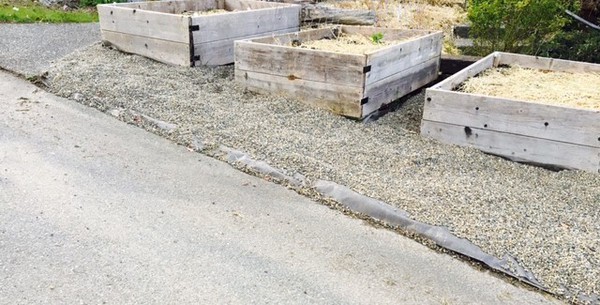 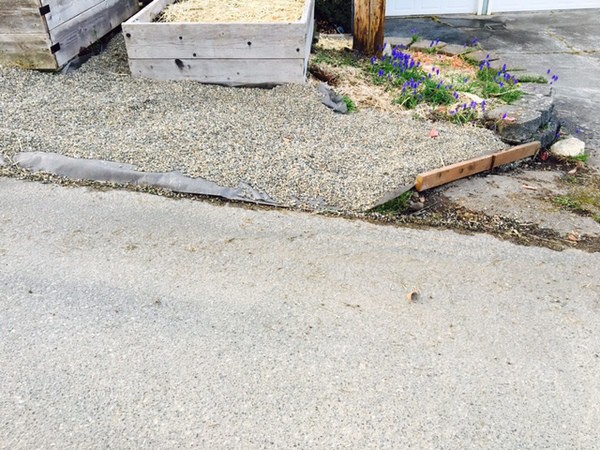 We need to eventually put a barrier around the edges to clean it up and keep the gravel from washing away. Any suggestions on something that will look decent?

Jack and I started making pizzas to freeze for his party earlier in the week. I was really proud of how he took charge and pretty much assembled all nine pies on his own. I grated the cheese and made the sauce and dough, but he spread the dough, applied the sauce, did the cheese and all the toppings. Just like last year, he took a more artistic approach to the toppings than I would have, but I let it go. 🙂 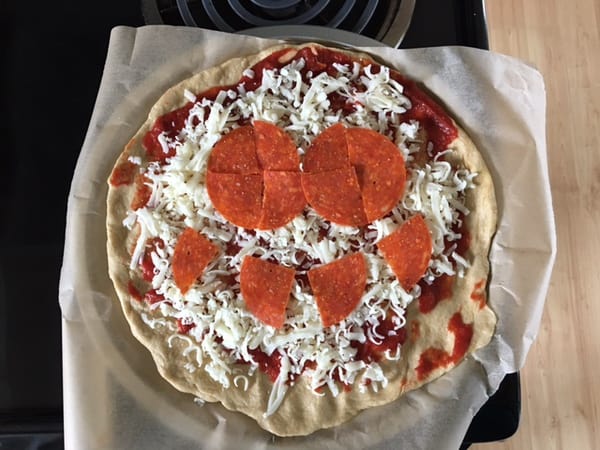 All four of us spent a sunny Thursday afternoon outside. I weeded, while Troy and Jack played a game they created a few years ago called “log ball”. You each set up three pieces of firewood on the lawn. Then one person throws a soccer ball towards your logs. First person to knock down all three of the other team’s firewood wins the game. While the big guys played log ball, Bennett sampled some of our garden soil. He approved of the humus level I have cultivated over six years. 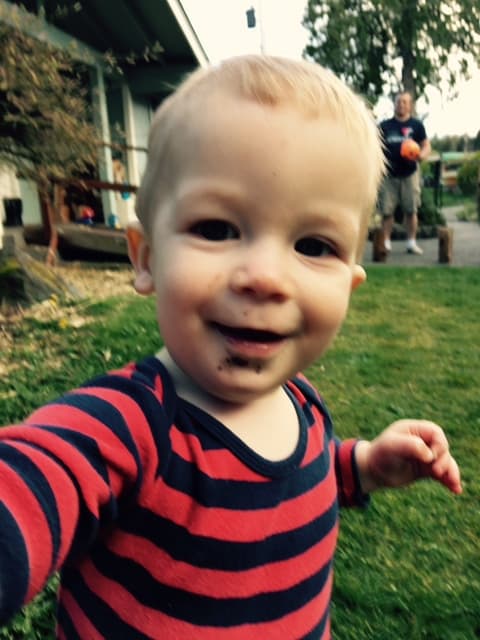 Signs of spring were everywhere, and I get itchy just thinking about it.

Apple tree leaves and hints of blossoms, with strawberry plants (that I thought were dead) growing underneath. Along with some weeds. Someone come take care of those please. 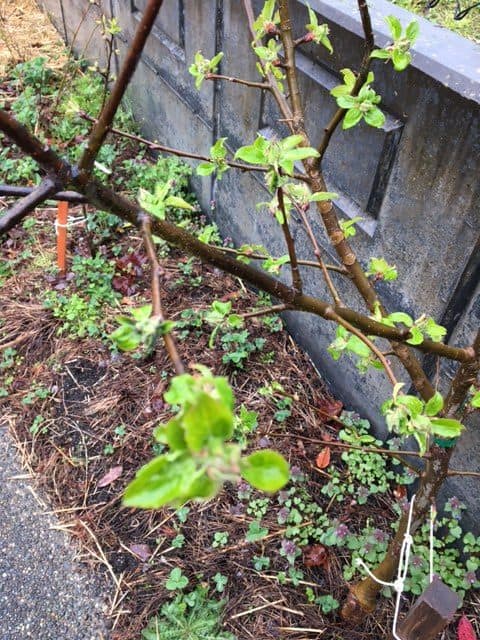 This isn’t my plant, but it’s cool. Anyone know what it is? I love the daffodils peeking out from underneath it. 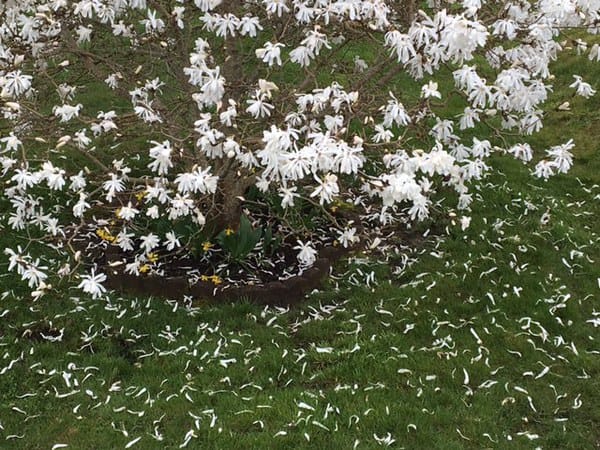 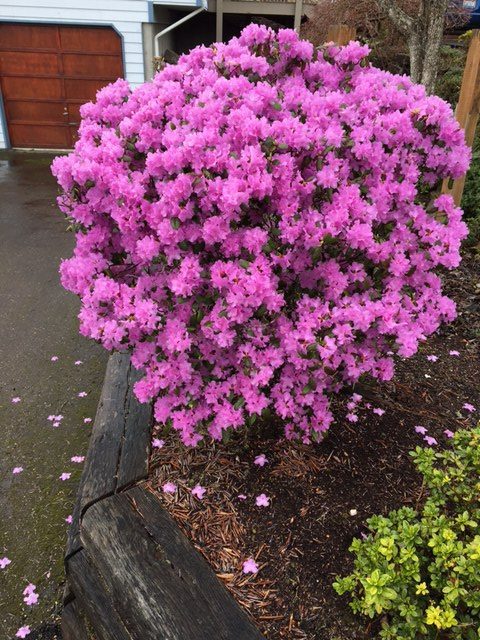 Tulips that were planted at least 10 years ago, and refuse to stop coming back every year. Relentless beauty. 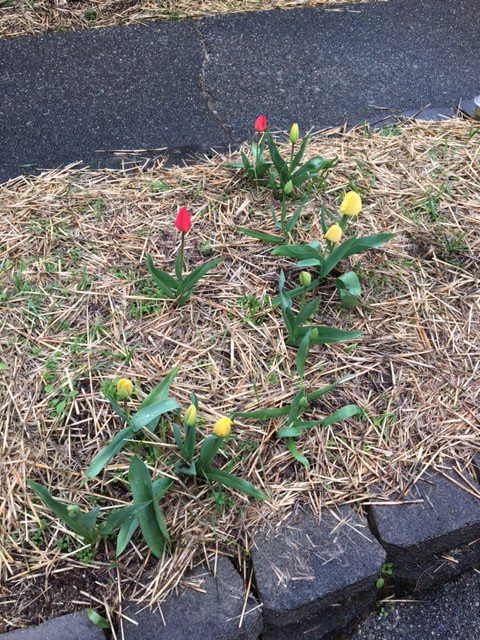 For those long-time readers, you may remember that in fall of 2015, I ripped out all of our lovely raspberry canes to do battle with the invasive morning glory vines (assholes) that were taking over. I spent two weeks in 2015 digging those punks up while seven months pregnant. I saved a few of the canes and replanted them, but let’s just say that our raspberry harvest in 2016 could be counted on one hand. It was sad, but necessary given the aggressive nature of those morning glory runners. The canes that survived have sent out a few runners, but of course they’re all in just two spots in the raspberry patch. I spent 30 minutes on Thursday digging up, dividing, and redistributing them to other parts of the bed. We’ll see how many survive, but fingers crossed we have a more robust crop this year. In previous seasons, our raspberries have grown so tall, that I had to go up in to our neighbor’s yard (we’re on a hill and yards are terraced) to pick 40% of the crop. Jack is already nervous that Bennett will like raspberries as much as he does, thus depriving him of his favorite fruit. Troy and I get to split a total of about 10 raspberries a year, so Jack’s berry consumption is a bit excessive by any standard.

I want to give a giant shout out to a company today. Nope, this isn’t sponsored or anything like that (but knowing the big brother nature of the internet, you’ll probably start seeing ads around on my site and others), but just a giant appreciative “thank you” to Infant Optics. We received this video monitor before Bennett was born, and it was a great monitor. It started having some issues a few weeks ago, and even though it was out of the warranty period, they replaced the handheld portion of it for free. My customer service point of contact was a lovely woman named Mae (fun fact: had Bennett been a girl, “her” name would have been Matilda, and her nickname would have been Mae) who went above and beyond to get this sucker replaced. So, a giant thanks to Infant Optics for standing by their product. 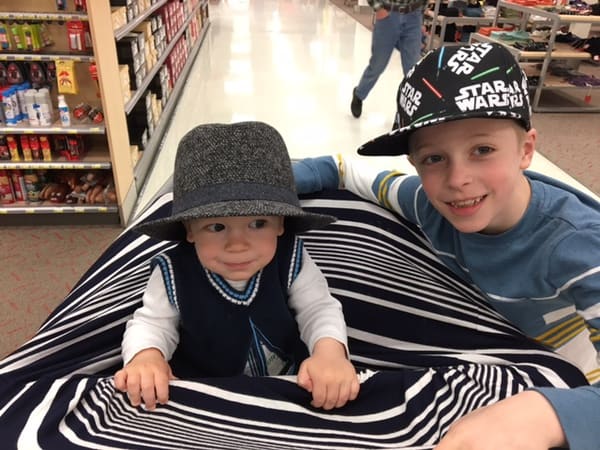 Meal plan time! I have an excessive amount of food in our upstairs freezer, to the point where I am almost having to force it closed. We’re cleaning it out this week so I can stop poking at all the food with a stick.

Monday:: Salmon cakes (was supposed to happen last week, but didn’t), and salad.

Tuesday:: Soup with farro in it, thanks to a few suggestions on Facebook, and biscuits.

Wednesday:: A creation I’m still not 100% sure of in my brain yet. I have puff pastry in the freezer and some grilled chicken. Maybe a smear of pesto, a sprinkle of mozzarella, and somehow it all bakes up nicely? Served with a salad and a side of (cooked) frozen peas.

Thursday:: Chicken gnocchi soup (also didn’t happen last week), salad, and leftover biscuits. It’s Jack’s first baseball game, so I want him to play with a belly full of whining from having to eat soup twice in one week. Ps, I think his team is going to be absolutely terrible this year. Should be fun!

Friday:: Either popcorn and movie night, or a slice of Costco pizza. We may run out to the mall after school to do a few errands, and redeem Jack’s free birthday cupcake at Barnes and Noble.

Saturday:: We’re taking my father-in-law out for dinner for his birthday.

I destroyed our budget this week; absolutely crushed it. Between stocking up with Costco’s great organic sales, and food for Jack’s family party, I spent so much money there this week. 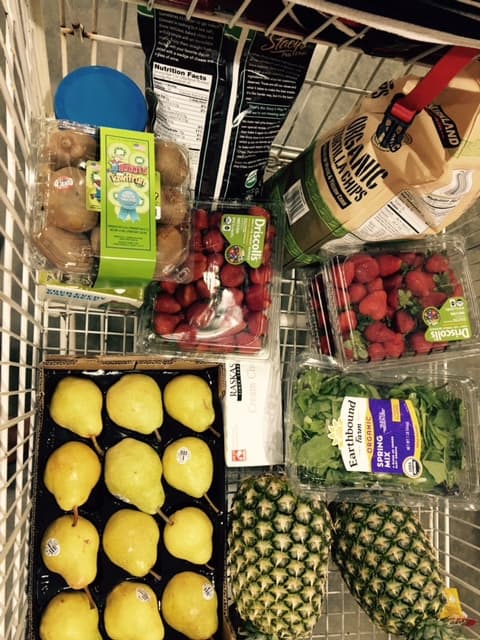 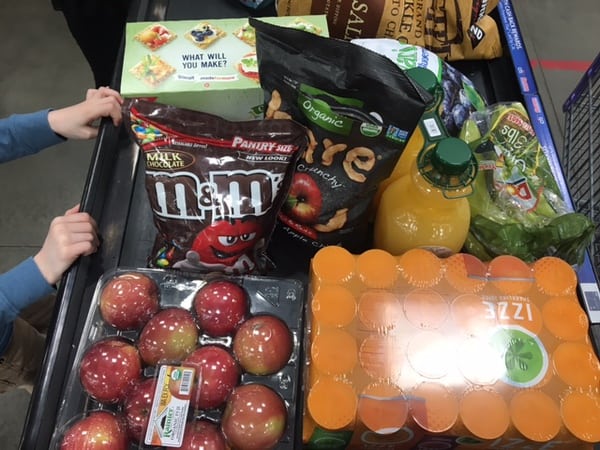 M&M’s are for the topping of Jack’s cake. Apple chips were an impulse buy and you’ll notice they are open, because both boys were whining and hungry. Kettle chips are delicious…but not mine.

Fred Meyer (grocery store) – $41.28. Both boys prefer organic goldfish to Annie’s cheddar bunnies, and of course our Costco doesn’t carry organic goldfish. They’re usually $3.99 per pack at the grocery store (or $3.49 at Target), but were on sale for 2/$5, and I had a $.60 off coupon. Boom! The salsa was the Friday Freebie via the Fred Meyer app. Deli bags are pepperoni and Canadian bacon for the pizzas for Jack’s party. Pineapple juice is for the freezer punch we make for every party. 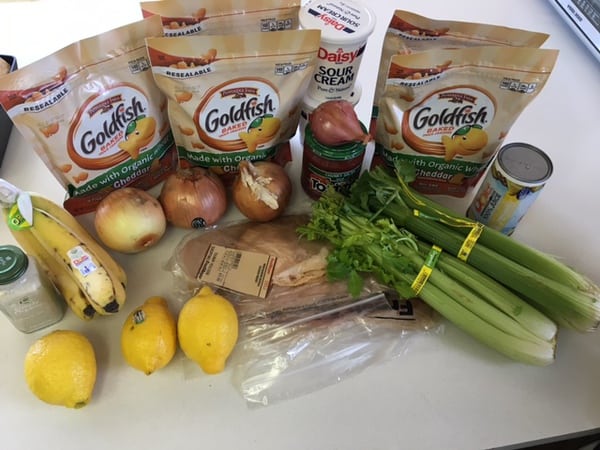 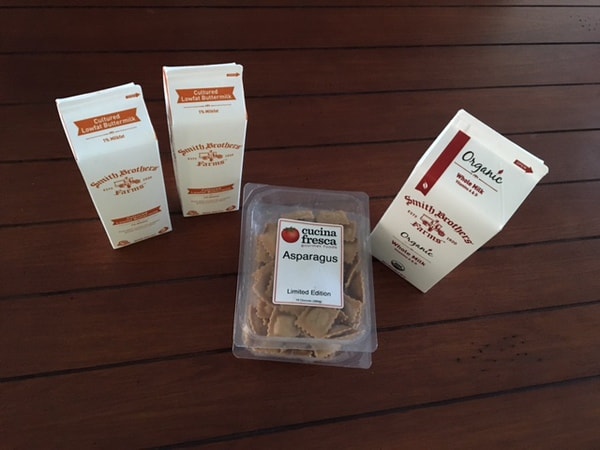