Is anyone watching 24 Legacy? Troy and I were huge 24 fans back in the day. And Lost. But that is another story for another day. When I saw they were re-releasing 24 with a new cast, I got excited. Troy and I have been enjoying it, and I recommend it if you are an OG 24 fan. The new lead was Dr. Dre in Straight Outta Compton, so Troy is only slightly sick of my NWA side jokes during the show. Only slightly.

Know what neither of us are fans of? Canning applesauce. Blah. We have had 80 pounds of apples sitting in our garage for well over a month. The apple farm where we purchase our apples had an end of the season sale at $.50 a pound. They are not certified organic, but follow organic practices and only use organic products. When I cracked open the boxes, there was some loss due to spoilage, but not much.We got a whopping 23 quarts out of that 80 pounds, and probably could have gotten two to three more if not for the spoiled ones.

Troy and I each have specific jobs while making applesauce. I am CEO for logistics, cutting, parboiling, canning, and cleaning. Troy is CSO – Chief Squashing Officer. He’s the Sauce Boss. Bennett was in-charge of being exactly where we didn’t want him to be, emptying out every item from his play kitchen, and throwing all the metal rings around the kitchen. 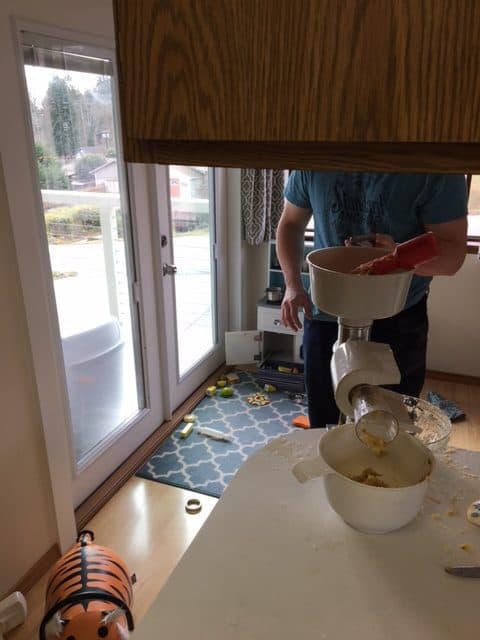 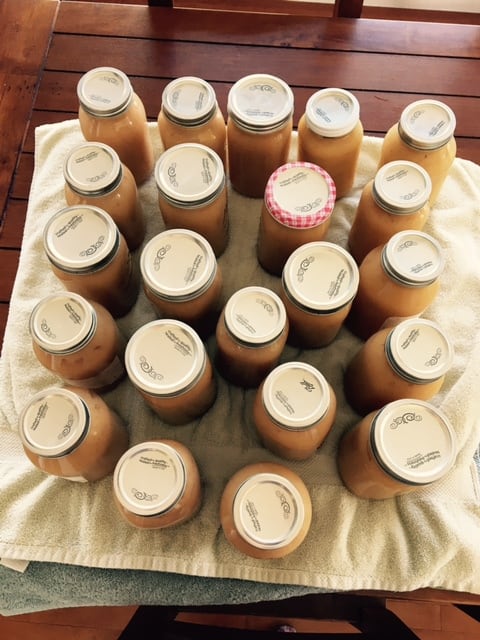 With school being closed on Monday, we hit up the zoo. B has been to the zoo a few times, but never really paid much attention to anything. This time though, he loved seeing the animals, partly because his favorite person in the whole world was there with him. 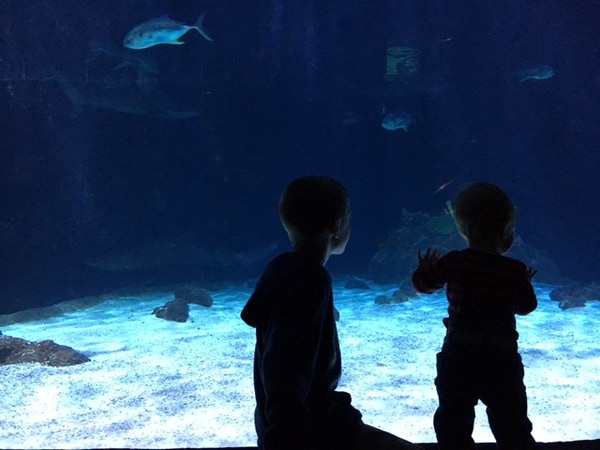 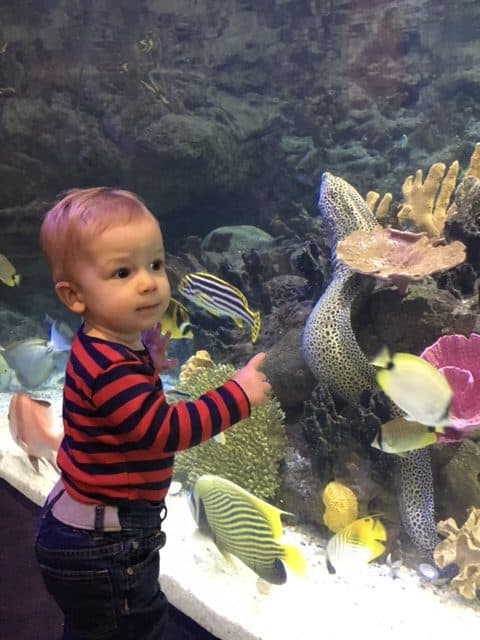 At the zoo, we usually get a basket of waffle fries to share, but deferred due to No Spend February. Instead, I packed lunch and Girl Scout cookies and we dined in the cafe in high style. 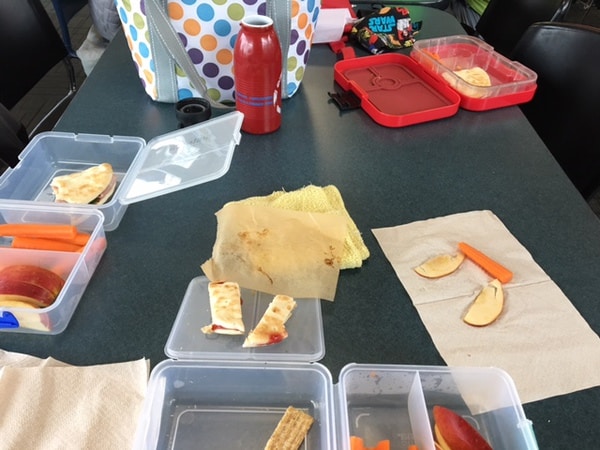 We shared a long table with another family who also packed lunch. We discussed bento boxes as they had a bunch of little separate containers with lids (which seemed like a pain in the ass to clean to me). I told them Jack’s bento was a Yumbox, and had lasted us almost three years. We talked prices, and I said it was $28 which seems steep until you realize how freaking sturdy it is. I heard a man behind us do a dramatic “that’s crazy” cough. So, I looked over at him and saw a table full of purchased food totaling at least $50 for his family of three. I can’t help but mentally do the math of how much packing lunches has saved us over the years. Even in the spendy bento. And since I’m great at math, the total came out to “a shitload”. 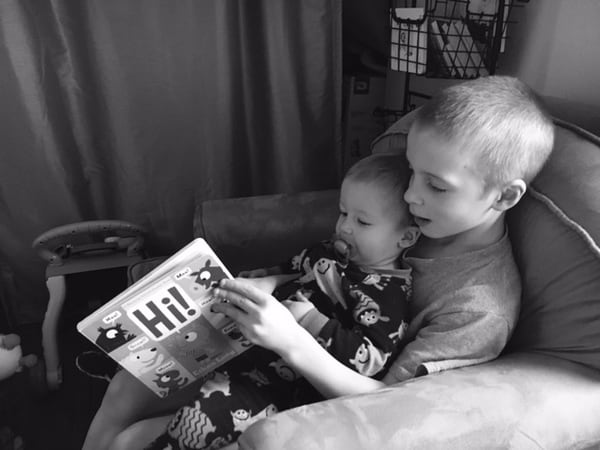 That photo above was like catching Sasquatch in the woods. Jack has become a ninja at avoiding having his photo taken. This is usually what we get when we try to snap a picture. 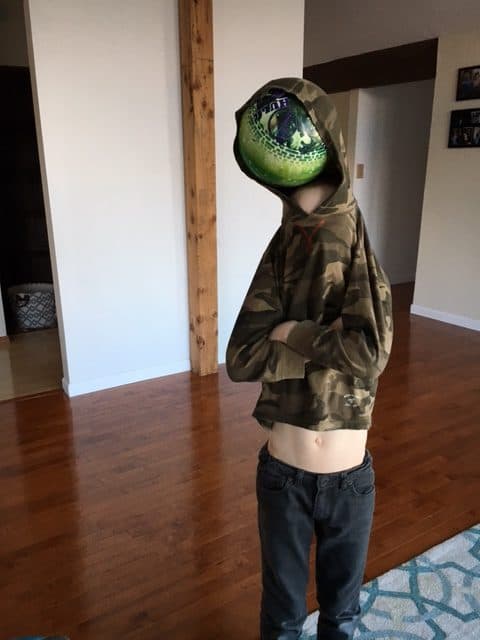 No Spend February was pretty bleh this week. We packed lunch for the zoo, utilized our membership to avoid paying entrance fees, I have really gotten back in to bread baking, and made yogurt with leftover milk that Bennett didn’t drink. There were days I wanted to go somewhere just to get out of the house, but didn’t see a need to waste gas just to go do something mindless. So, instead I took advantage of some gorgeous (but cold) weather and B and I look several long walks. I crushed my podcast backlog, got almost 20k steps multiple days, and Bennett got to see some birds and dogs.

But, we also spent some money outside of necessities. Jack and Troy went to movie night at Jack’s school for a fundraiser, and that was $5. We also um, bought airline tickets for summer. My friend/old coworker/one of Jack’s godmothers is getting married in Los Angeles in July. Alaska Airlines was running a decent sale, so we bit the bullet and bought them. I decided the principle of not getting them until No Spend February was over, was stupid considering how much we saved by booking at the low rates. I also spent $90 via Turbo Tax to do our taxes. Yep, I know they have a free version, and yes, I would love to use it, but if you’re self-employed the basic version doesn’t work. 🙁 The good news is for the first time in eight years, we’re getting a refund. We usually owe a bunch, so this was a nice change of pace.

You should join us on Instagram and Facebook, cause we had fun this week (and you also get updates on when new posts are up)! I shared a picture of an onion ring that reminded me of the little plastic rings we wore on one side of our shirt hems in the 80’s. And then of course I “totally” ate it. 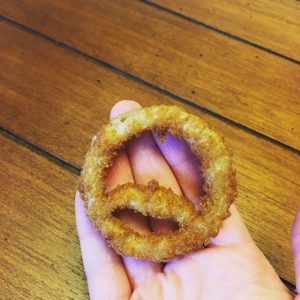 Monday:: Salmon cakes. Yes, they were on our menu last week. But some idiot (it was me) forgot to buy salmon at Costco. Doh. Salad, broccoli, and biscuits.

Wednesday:: Chicken gnocchi soup, and salad. Troy volunteered “us” (totally my classic move) to bring soup to a church dinner for the first night of Lent. So, I’m just going to make enough for us too since we can’t stay and eat.

Saturday:: I’ll make and freeze pizza at some point during the week. I’ll be gone all day at a food photography class. I am so excited!

This week was a whopper of a week on the ole’ budget. We got our Costco rebate in the mail, and I bought soooooo much on Sunday. Even Jack was like “I’ve never seen the cart this full”. $151.85. Did you know Costco now has organic Triscuits? I squealed when I saw them. They also carry 5 lbs of chopped organic frozen butternut squash for $8.99. It was so nice and easy to use it to make a soup for my mom last week. 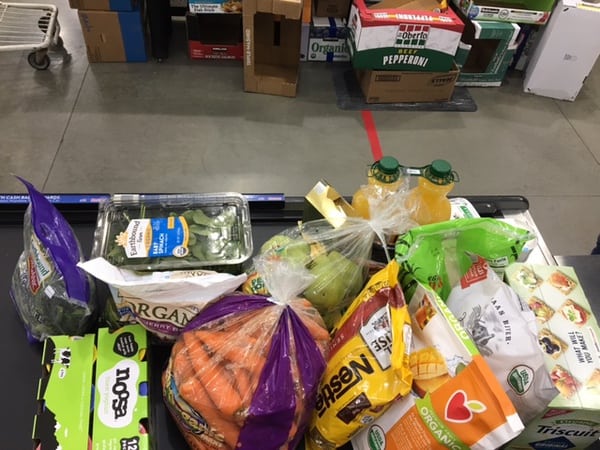 $9.72 from our local butcher for grassfed beef. I didn’t include a photo, because raw burger? Gross.

$21.16 at the grocery store. Jack started eating those nuggets after his hospital visit when he was gluten-free for a bit. He fell in love with them, and gets some every movie night now. The yogurt was the Friday Freebie from the Fred Meyer app. I used to buy a head of cabbage any time we had coleslaw, but the price of cabbage is so high now. Buying the preshredded stuff is more economical and is the perfect amount for us anyway. 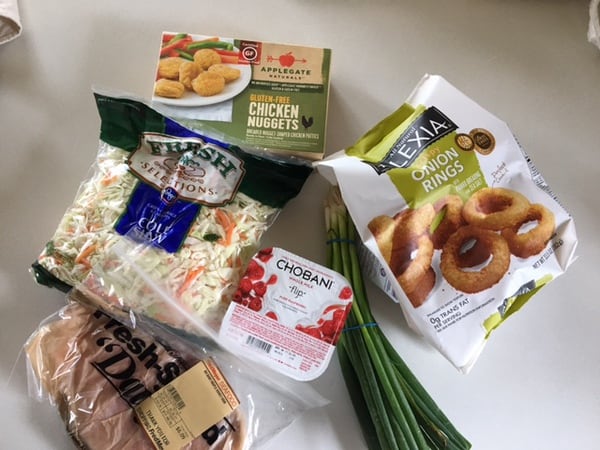