Time for blogging confessions. No, not my monthly confessions post, but just a little “behind the scenes” look at this little corner of the web I have going on.

Some weeks, I schedule my posts. :Gasp: I know. If I know the weekend will be nuts or I’ll be short on time, I jot down things in my Scattered Sundays posts and just keep saving it until I’m ready to tie it all together and hit “Publish”. Some weekends, it is just not feasible for me to write late on Saturday night, or early on Sunday morning. As I type half of this post, it is late(ish) Thursday night, and I’ve been awake since 4:30 am. I wish I was in bed, but I’m waiting for a load of diapers to finish up. I’m shocked right now that US Weekly doesn’t follow me around to document my glamorous life.

Why all this explanation? To let you know that last week, my Sunday post was mostly done by Saturday night. I had a quick 15 minutes to edit it and then off to bed. To anyone reading my post last week, you’d think that a huge big freaking deal of a march hadn’t happened the day before. As of Saturday night, I didn’t seem to have the words to write my emotions about it. It seemed unfair to the event to try to half ass a mention of it.

I’m not going to get political about it. I’ve said my piece (and peace!) previously. My thoughts are known and my feelings are obvious. What I witnessed last weekend gave me all the feels. My mother-in-law was at the Seattle march, and had a very powerful day with her friends. I wish I could have gone, but with my morning responsibilities to the young and older under this roof, it would never have worked out. Regardless how you personally felt about the march, it is always refreshing for me to see that many people organized for a cause they believe in. And to do so without violence. There are loads of marches, protests, and gatherings I don’t fundamentally support, but any time crowds gather and can do so peacefully, I always have to give a tip of my hat to the participants.

If you were cheering the people on, or gritting your teeth through the footage, there is a blatant fact that no one can deny. Regardless of which side of the aisle you fall on, or if you’re part of the weird middle aisle runner with me over in Independent land, you will still agree with me on this…there are a lot of creative sign makers in this country and around the world. You may not like what was on the signs, but damn some people put some serious work in on them.

About a month ago, Bennett started climbing our stairs. I always stand behind him of course to make sure he doesn’t fall, and as I watch his fat little cloth diapered butt wiggling up the stairs, it amazes me how the body works. How it can just move with little forethought? When Bennett and I take our walks some days, I’ll be walking up a hill (my neighborhood is completely full of them) and think “what if I just stopped knowing how to move my knees and I’m stuck on this hill”. Perhaps it is because I’m surrounded by a few people whose bodies don’t do what they want. Or maybe I am tired and have eaten too many m&m’s and I’m zoning out. How are my fingers even typing this?

What if we all live in the snow globe of a kid’s imagination?

Jack recently started watching the 1990’s live action Teenage Mutant Ninja Turtles on Netflix. I watched a few minutes of an episode with him, and holy crap is it racist! I find myself scratching my head at some of the wording choices on early 90’s Law and Order reruns as well. It is so interesting to see what was considered ok and acceptable just 10 to 20 years ago.

Remember the s’mores tart I made last Saturday? Well, the very next day, I made this: 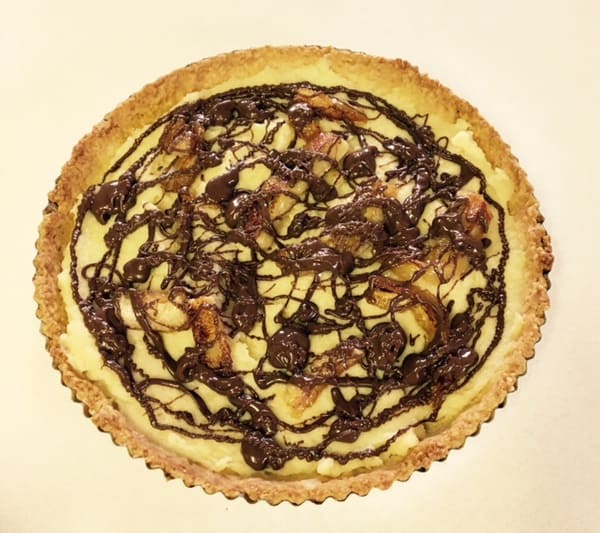 Vanilla bean tart with caramelized bananas and Nutella drizzled on top. I wanted a plain vanilla tart with fruit on top. But, all the best tart fruit is summer fruit, and I refuse to buy berries in the winter. They’re sad, being trucked in from so far away, and have no taste. I’ll wear my berry snob hat proudly.

I think once you grow something, it is so hard to eat the grocery store version off-season. You know how fresh is supposed to taste, and anything else is a major let down. I often ask Troy for dinner ideas when I am planning our meals for the week. I almost always get a list back and it usually includes “BLTs” on it, to which I respond “that is a summer dinner”. Winter tomatoes are something I would not wish on anyone.

My produce snobbery may have something to do with the fact that I eat punch bowls of tomatoes and mozzarella for eight weeks straight in the summer. I’m like a squirrel packing away memories of still-warm tomatoes for winter.

That being said, I have no idea when “banana” season is, and I typically buy them once a week for smoothies for the boys. So, I’m a produce snob who is also a giant hypocrite. Fact.

I used versions of the same recipe for both tarts, and while they were both good, I found the crust a giant pain in the ass to work with, and the custardy part had a weird texture with the vanilla one. This, of course, means I need to recreate and improve the recipe and then share it with you. Lot’s of tarts are going to be eaten in my house in the next month or so. Food blogging is a rough gig!

Bennett turned one on Saturday. What a freaking trip it is to see how quickly this year has gone by. I feel like with Jack, that first year seemed to pass so slowly, and his first birthday was more a celebration of us still being upright and (mostly) sane by the end of it. We’ve had one hell of a year, with lots of wonderful moments, and some pretty low ones.

I worked part-time on and off for my old company until October. We started watching my nephew before and after school in March. My mom was diagnosed with cancer, and a coworker found out she had an aggressive brain tumor. My grandma passed, as well as my mom’s uncle. I worked at staying sane and started walking almost daily. I hit 20k plus steps multiple times in the last year. I cried in the shower just as often. I tried to take steps to grow my blog. I did a website redesign, started working with a few new partners, and am working at improving myself and this space as often as I can. I had some successes and big failures, but I never stopped trying.

Through it all, there has been family. Troy, the boys, my parents, sis’ family, in-laws, aunts, uncles, cousins, and people who don’t share a speck of DNA with me, but are family all the same. With a full year behind us, I am blessed that the people in my life made sure the dark times were overshadowed by the light. Love, family, friends, and peace kept me upright and moving. Also? You all. Thank you for the kindness, encouragement, positive feedback, and humor you give back each and every day.

And Nutella. Nutella was a frequent source of comfort.

We celebrated Bennett’s big milestone with friends and family, and it seemed like it went well. People appeared to be having a good time, the food was gobbled up, and Bennett had a blast. He still doesn’t understand the concept of presents, but he enjoyed playing with the bags, and the toys as they were opened. We’ve read all of his many new books, and he has played endlessly with this ride on tiger my parents got him. His legs are too short to actually ride on it, but he loves to push it around and walk behind it. 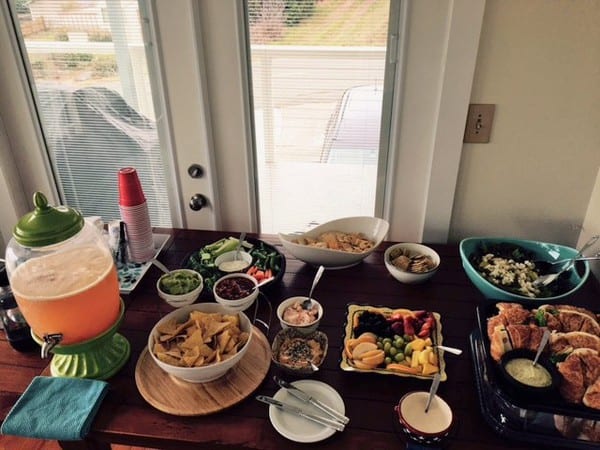 As he was about to go to bed last night, Jack asked him “Bennett, do you know what the best gift I ever got was? Pokemon cards. And you”. Now that is some real love right there. Those two are so obsessed with one another, it is hard to know where one starts and the other ends. 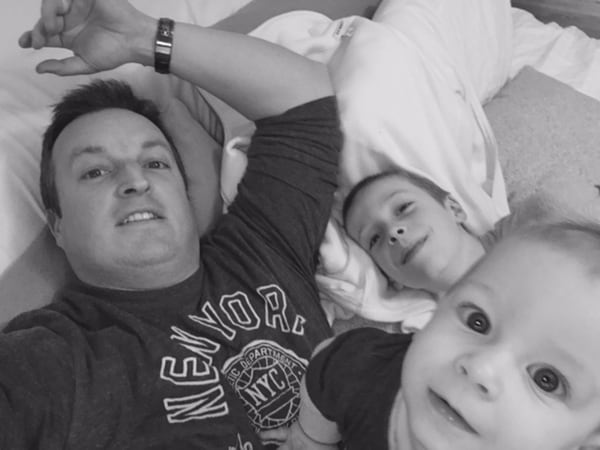 He greatly enjoyed his first taste of sweets and downed the yellow cake cupcake with strawberry cream cheese frosting. Last year for Jack’s birthday, he wanted strawberry cream cheese frosting as the middle layer between his two layers of round cake. I blended some strawberries and added it to the frosting, but the taste was weak. I added some more, and the taste was perfect, but it was so runny. I put it on the cake anyway, and it was a colossal failure. I had an “ah ha” moment about four days ago and decided that adding some homemade strawberry jam would maybe do the trick. The consistency and taste were perfect, and I’ll never do it another way again. For the curious, it was two very generous tablespoons of jam in a normal batch of cream cheese frosting. 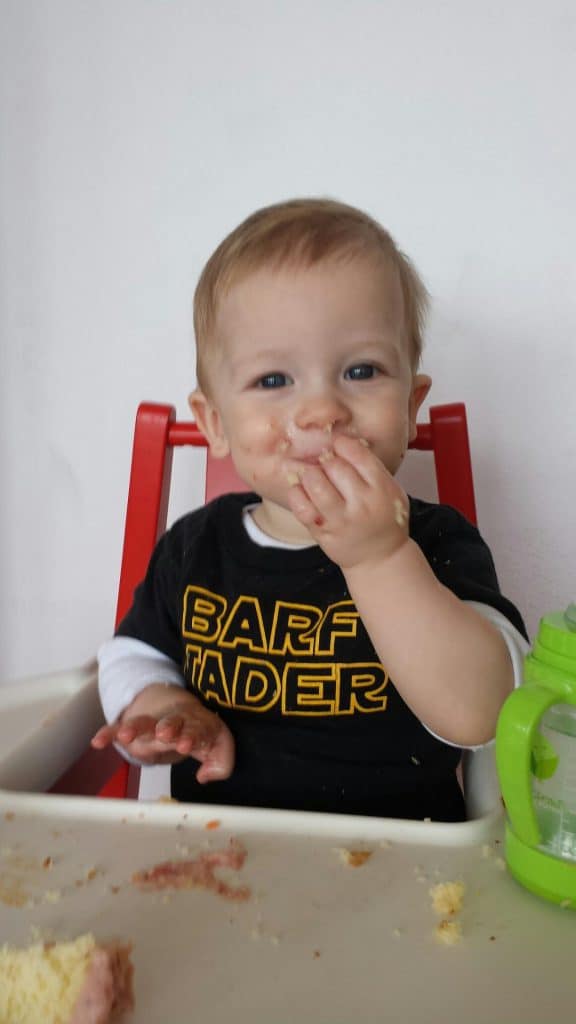 We never bought Jack a single legitimate birthday or Christmas present until he was about four. Until then, he had no idea what was really going on, and got so many gifts he never knew who gave him what. We’ll follow in the same tradition with Bennett for the most part. Troy and I did work on a project together over the last week or so, and I’ll share that in a separate post tomorrow. Let’s just say, when Bennett rounded the corner and saw it on his birthday morning, he squealed and played with it for a good 30 minutes.

Meal plan time! We have lots of leftover odds and ends from the party, so I plan to incorporate parts of it in to most dinners this week. Reuse, repurpos and reheat.