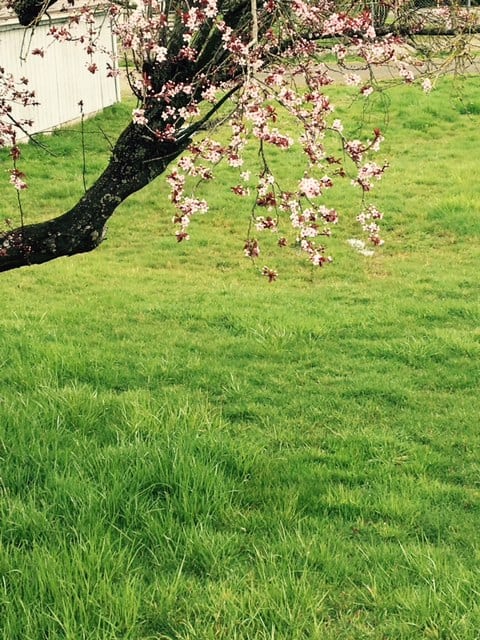 Hypothetically speaking, how do you know when running shoes are worn out? Not that my running shoes have ever actually seen running. The ice cream truck hasn’t been in my neighborhood for MONTHS. But with all the walking I do, these shoes have seen some mileage. They’re still comfortable and I feel like they are still supportive (they told me my ass looked great the other day), but how will I know when it is time to get a new pair? What should I be looking for as a warning sign they’re getting close to biting it? 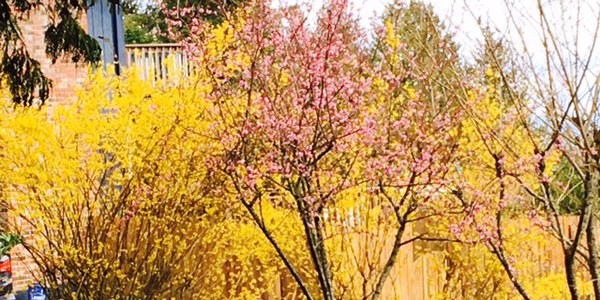 I have had a big imagination since I was a kid. Things always got away from me, but I was able to bring myself back to reality from time to time. Living in the Puget Sound area, access to water is a given. We’d swim in lakes, tube in rivers, and be on boats as much as possible. Even while I was happy to swim and splash in the open water, I always knew that there were monsters down there that were trying to eat me. I often did my best to float, since kicking my legs would inevitably draw their attention to my location. They also lived in pools. But only in the deep end.

You know things are getting bad when you go to write something you think is witty, start off with a tangent about monsters in the water, and then can’t remember your freaking point about the story. Brains need sugar. I’m just saying. 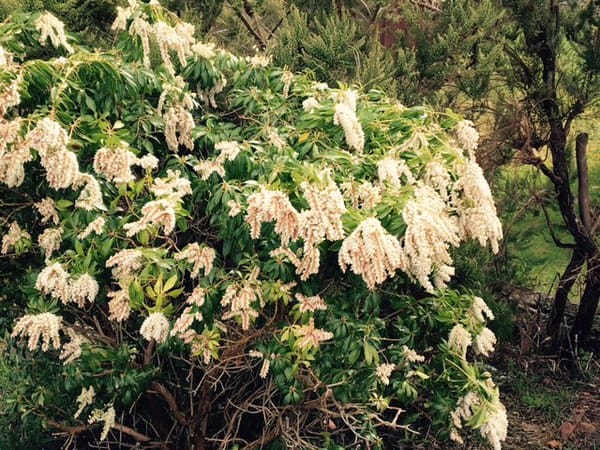 We finally replaced the stupid shelf lamp in our living room. Troy had attached it to the wall, but Bennett was still pretty annoying about messing with it. We knew we wanted something different for a while, but Troy and I have very opposite tastes in decor. Picking out our area rug almost led to marriage counseling. So lamps and other decisions don’t happen quickly. We used to have a ton of photos on the wall by this lamp, but cleared them off after the wood stove was installed. Jack and my nephew loved to throw bouncy balls on the wall where the stove is now. Removing the photos from the other wall gave them an area to still use. As someone who definitely has a minimalist decorating vibe, I don’t mind the stark white walls at all. At some point they’ll get tired of throwing balls on the wall and we’ll spend another six months finding some artwork for the space. 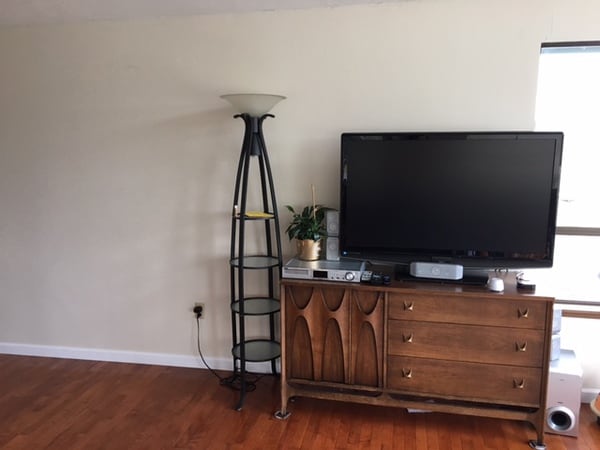 New lamp. It’s from Target and was on sale. It’s super heavy, gives off good light, and because the sides aren’t solid, Nerf darts fly right through! 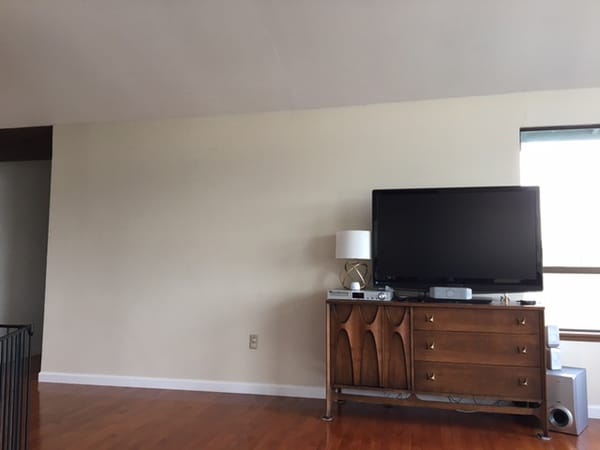 We put the lamp on OfferUp (selling app), and Troy posted it on Facebook, and we had six people interested within a few hours. Got rid of it the day after it was posted. 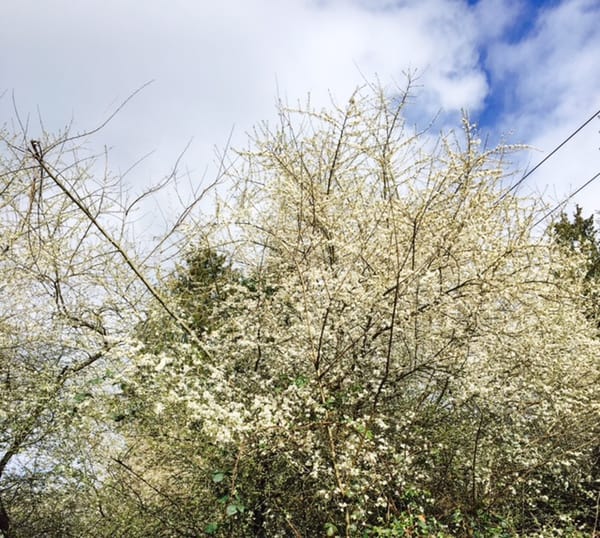 I finally got our spring garden planted this week. I am so excited to see how the DIY seed tape I made turns out in a few weeks. It was soooooooo easy to just unroll everything, throw some dirt over the top and call it a day. As I stood in the front yard, I saw so many weeds that needed to be pulled. Jack’s family birthday party is coming up soon, and this coming week are half days at school. I’ll have both older boys in the afternoon, which means zero time to get any work done during Bennett’s afternoon nap. The week after that is spring break, which is always a crap shoot for getting much accomplished. On top of that, I’m working on a quilt for his birthday that I am 99.99% certain I cannot finish before the party. All of this was racing through my head as I looked at those weeds.

So, I did what every gardener has done since the dawn of time. Did I grab my gardening gloves, hand trowel, and buckle down and get to work? Hell no! I got a bale of straw and just put a nice little top-dressing over all the weeds. Everything looks fresh, clean, and like I spent a very long time hand pulling the weeds.

And then the wild peacocks in our neighborhood came and tossed it all up. Peacocks. They really are nature’s douche bags. 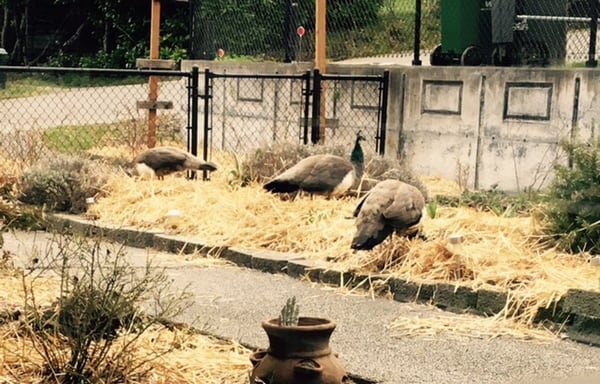 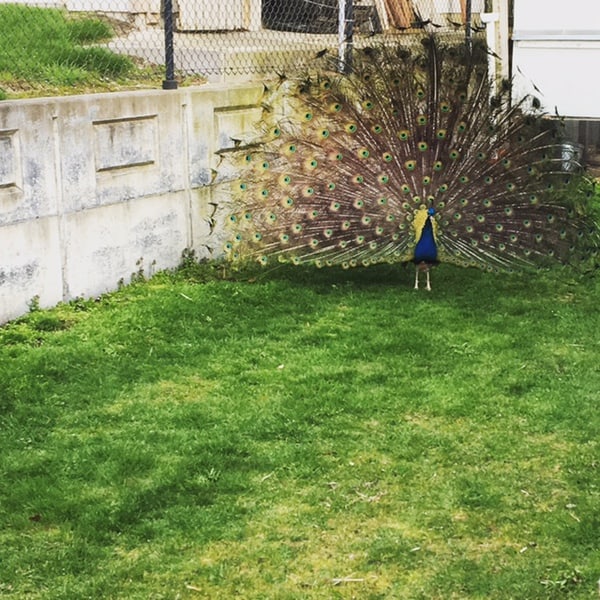 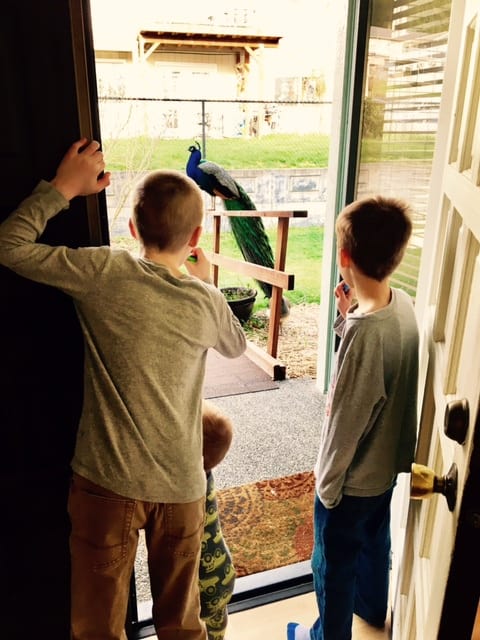 Monday:: Homemade mac and cheese, roasted broccoli, and salad. Yes, this was supposed to be dinner last week, but we needed to avoid dairy due to Jack’s tummy issues.

Wednesday:: Boys will have homemade frozen pizza and salad. The salad isn’t frozen. I’m going out to dinner with some former coworkers.

Thursday:: Popcorn dinner. This will be a day early because Jack has baseball practice on Friday. Who holds practice on a Friday?

Saturday:: Teriyaki. Jack has a birthday party to go to, and it is right next to our favorite take out place.

This week was a budget buster at Costco! They have all their organic items featured right now, so a lot of them are on sale. It’s blowing my budget, but I’m stocking up on essentials that we use every single day. $123.08 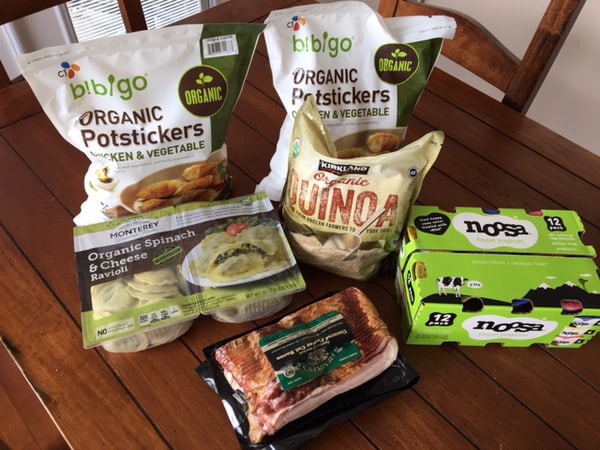 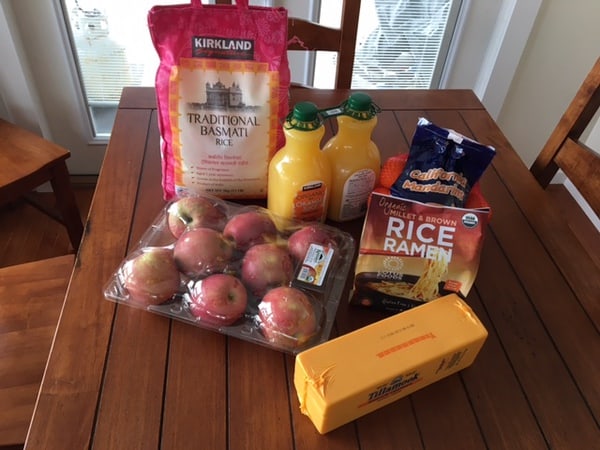 We tried the ravioli. It was decent; I wouldn’t say amazing, but it was good. The label cracked me up though. Baby spinach is too cruel? 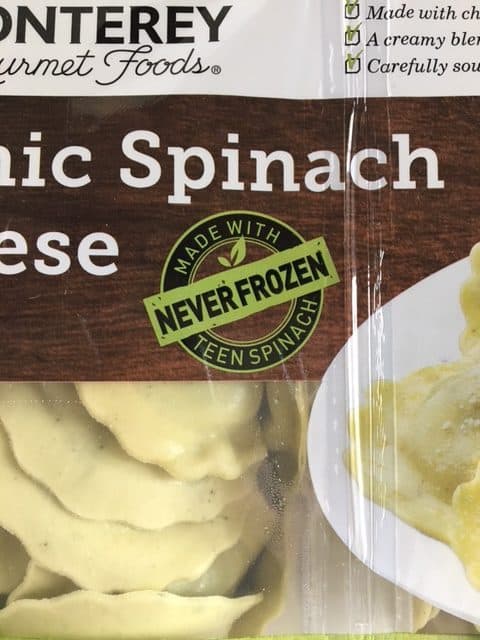 Noosa is our new favorite store-bought yogurt (yoghurt), and Costco tends to only carry it during certain times of the year so we stock up when we can. I’m usually really good about sticking to my list, but that ramen was a total impulse purchase. I love making homemade ramen, but I usually buy a package of the organic kind and just use the noodles. That’s $1.39 a pop and a lot of packaging to toss for just the noodles. I’m super excited about trying this stuff out.

I made the grocery store my bitch this week. Between Friday Freebies (free items for people with the Fred Meyer app), coupons, sales, and  the Ibotta app, I crushed my savings. 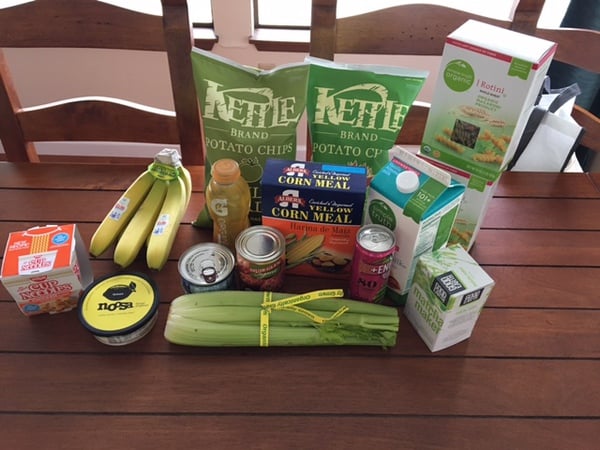 The Cup of Noodle and V8 Energy drink were Friday Freebies items and will be donated to our Community Resource Officer at church. She works with anyone who walks in to our church seeking assistance. It ranges from people who are homeless, to families and seniors who have fallen on hard times.

I had a coupon for the tea, the Noosa, the almond milk, the pasta, and the Kettle Chips. The Ibotta app gave me cashback for the tea, the organic Gatorade (we keep it on hand for when Jack is having stomach issues), the V8 Energy, and the tuna. I cannot handle caffeine, so energy drinks are not my bag at all. But Ibotta had a $1 rebate on it, so not only did I get it for free, but I earned a buck. Ha! Troy likes to have some tuna in his locker at work for emergency meals. It was $1.79 a can, and there was a $1.50 off of two Ibotta rebate, so $1.04 per can. The chips are for him too. They were 2/$4, and I had a $1 off coupon. The tea was on sale, I had a $.50 off coupon, and there was a $1.50 Ibotta rebate. 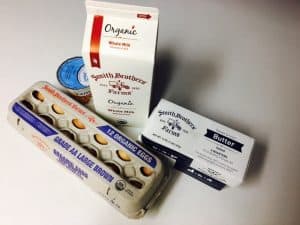 originally posted on March 26, 2017; Updated on June 12, 2018
6 Comments//Leave a Comment »
Categories: Meal Plan, Scattered Sundays
« Previous PostSmall Business Showcase #5
Next Post » Why We Are Doing Things Differently With This Kid