Scattered Sundays and Meal Plan for May 1st- 7th

People who say stuff like “the time sure flew, how is it May” generally make me groan. We know how to the calendar works. We know that May comes after April. It’s logic people.

But holy balls, where did the time fly??? I swear it is still January and my calendar is wrong, wrong, wrong. Maybe it is the unnaturally rainy winter and spring we’ve had. Yeah, everyone thinks Seattle is super gloomy and rainy all the time, but it really isn’t. Usually. This season though has been a hot mess of rain and more rain. All the seeds I planted have rotted. We’re wearing boots much longer than is socially acceptable, and I’m sick of the chickens having muddy feet all the dang time. Maybe the chickens need boots? Side note, I was just telling Troy that a chicken’s natural tendency is to get high once the sun goes down. Since weed is legal in Washington, I quickly clarified that I meant “get up to a safe position to roost”. We then decided that chickens who smoke pot would be called “smoked chickens”.

Yes we do need more interesting lives. Thanks for noticing. 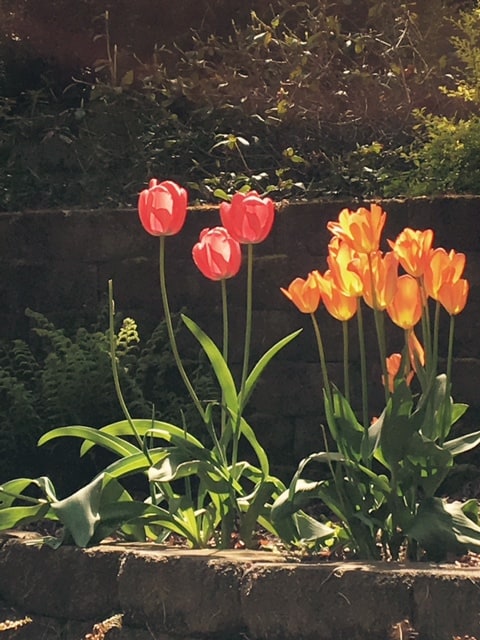 I truly appreciate everyone’s support and encouragement over my Etsy shop opening last week! I’ve had a blast sending out orders, and accepting a handful of custom requests. Here are a few of my favorite custom orders I’ve done over the last week. 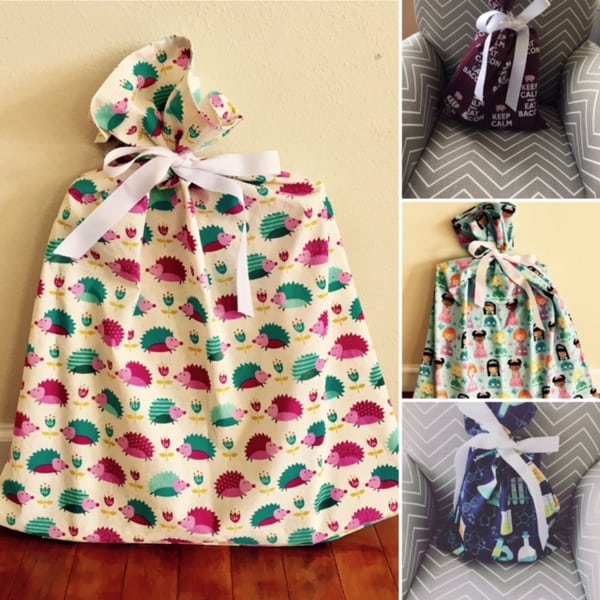 I’ve made some other new bags over the last week and will be posting them on Monday or Tuesday. Follow The Blind T-Rex on Instagram to get info on the newest releases, and special sales. I’m not saying there may be a sale on a few items a next week, but…there may be a sale. 🙂 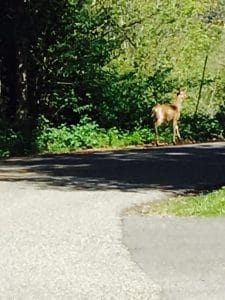 A new friend Bennett and I made on a walk.

We went to the open house for the Highly Capable program last week, and reinforced pretty much my thoughts on the whole thing. Troy and I were aligned on what we wanted to do, but we wanted Jack to come to his own conclusions. At the end of the evening, he looked at me and said “I want to stay at my school”. Done and done.

My biggest fear of walking away from the opportunity, was that he would be lost in the shuffle once he got to middle school and high school. What we found out last week made me feel 100% better about saying no to the opportunity. Apparently, once Jack was approved for the program, that “highly capable” label was attached to him until he graduates from high school. He never has to retest or requalify, and is always eligible for services. Once they get to middle school, the HC kids are in a cohort for certain classes, and he can still be included. Additionally, he’ll have check ins with a counselor each year to make sure he is staying on track with challenging classes, etc. We’re all very confident in our decision and feel like a weight has been removed from all of our shoulders.

Last week I asked for some topic/post suggestions, and you all rocked the freaking mic. Thank you! I want to clarify that I’m not looking to change anything about this blog, but coming up with three to five posts per week can often become a creative challenge. One thing I learned while reading all of your great ideas, is that I need to refer back (link) to old posts more often. Almost all of the requests were things that I have already written about, but bringing them back from time to time would be helpful for newer readers. So, I will make more of an effort to do that going forward. 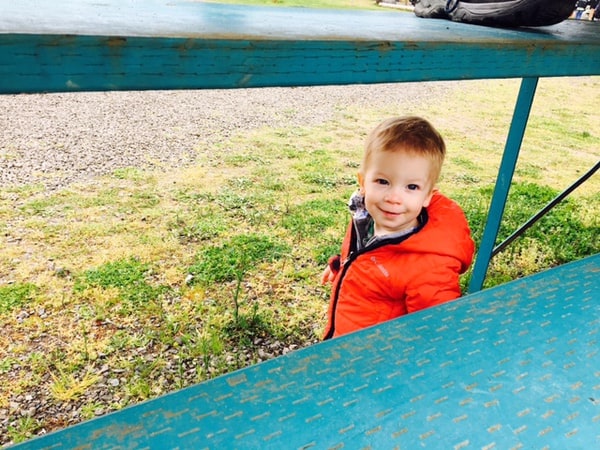 Saturday:: My nephew’s birthday party. Per Party Bitch rules, we’ll all be going out to dinner after the clean up. 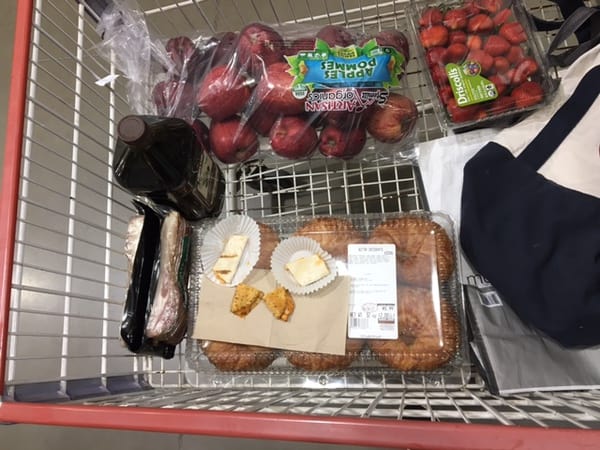 I find red delicious apples so boring and gross. Sorry Washington State, don’t kick me out. Also? Starbucks taste like burnt feet. But those apples were cheaper than half as many fuji apples. Both Jack and my nephew have a bunch of loose teeth and feeding them is a nightmare. They prefer the softer apples right now, and have both agreed that croissants are tolerable to their delicate mouths. Quick tip about the Costco croissants – they go bad fairly quickly, but freeze beautifully. I keep a few in an air-tight container on the counter, and replenish from the freezer when I run out.

I do my best to eat produce locally and in season. Once you garden and grow your own, you know that in season strawberries are 1000% better than grocery store berries. But, when Costco starts getting organic strawberries from California in April, I tend to buy a package every week. After months of apples, pears, and oranges, we’re ready for a taste of spring. I noticed the first flower on our strawberries this week, and I’ll count down the days until the good stuff is only 10 feet from the kitchen. 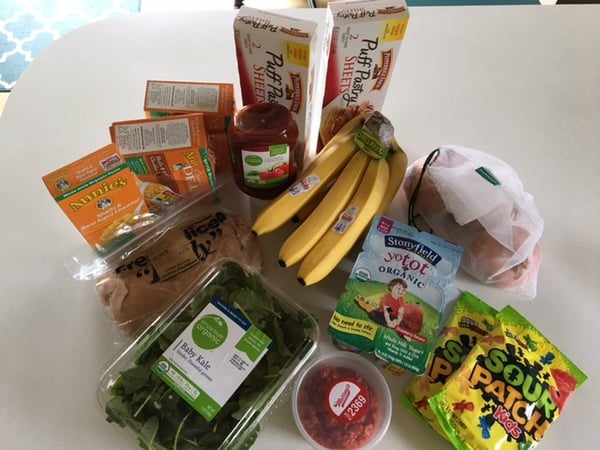 The Annie’s mac and cheese on the left was the Friday Freebie via the Fred Meyer app. So were the Sour Patch kids, and then the Checkout 51 app (recommended by a few of you during my ibotta post) had a $1.25 rebate with the purchase of two packages of Sour Patch kids. They were 4/$5 at the grocery store, so essentially both bags were free with the rebate and freebie. I gave them to my sister to use in her classroom. This week, they have AP testing and the kids could likely all use a little bit of a candy break.  The bigger boxes of Annie’s mac and cheese were in the bargain bin in the hippie section. They looked like they had been run over with a forklift. I snagged them for Troy to keep at work as back up meals. Some coworkers are a bit over eager to toss food from the shared fridge, even if it is marked with the date. From time to time, Troy will find himself without food when he gets to work in the morning.

The yogurt was reduced to $2.29 because it expires in less than two weeks. Both ibotta and Checkout 51 had a $.75 rebate offered, and I had a $1 off coupon, meaning I “made” $.21 on that yogurt. And with all the fabric I have been buying, I’ve taken advantage of $5 rebate from Joanns on the ibotta app. All good things. 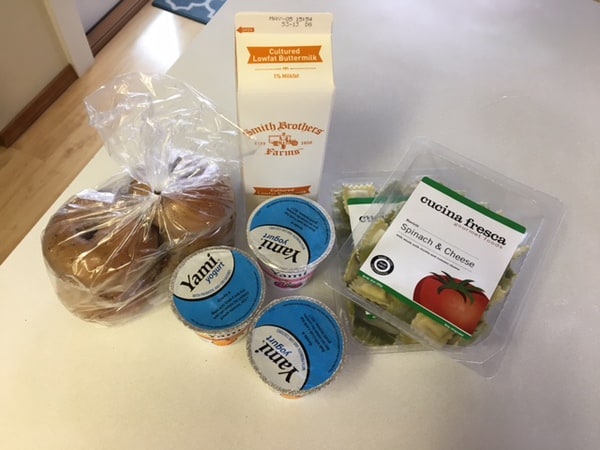 The delicious asparagus ravioli I was looking forward to ordering was no longer being offered due to the seasonal availability. We ordered the Cucina Fresca spinach and cheese ravioli and it was absolutely delicious.

What are you having this week??