Well, that wasn’t quite the Thanksgiving we had planned!

We were ready for over 20 people to descend on our house Thursday afternoon. However, around 12:50 pm on Wednesday, Troy informed me he was sick and thought he had the flu. Knowing how last year went down, we made the quick decision to move the event to my in-laws and have Troy sit it out. Once the invitees heard about the germies, it kind of snowballed and everyone just chose to not come at all.

I had been cooking and cleaning for days, and given my well-documented lack of patience for ill people whom I happen to be married to (and generally most sick adults), I can’t say it was an instant sympathy rally on my part. It was such a freaking letdown, and given that I consider getting sick a personal choice most of the time, Troy was in my cross hairs for a few hours.

Troy never understands my lack of empathy when he is ill. I can’t say exactly where it comes from, but I have a guess it is from a mix of my childhood. I was a super dramatic hypochondriac, and once my parents stopped feeding that need for attention, I stopped thinking I was constantly dying. Now, I’ll never even admit to being sick; it’s always “allergies” if I say anything at all. Part of it also might be my parents and their issues. I see the same “never admit defeat” attitude in my sister as well. I joke that while some people get a cough and call in sick (not referring to Troy), I’m so determined to be in control of my health, that I willed Bennett to stay inside until my giant 18 month work project finished. For those of you keeping track, my huge deadline was at noon on January 27th. I left work at 3 pm, contractions that I could feel started around 6 pm, and Bennett was born at 8:30 am on the 28th. Because that is how my ute rolls. I’d love to hear from other fellow kids of parents with chronic illnesses. Do you also have to be on death’s door before you either admit to being sick or even take a Tylenol? Are you wholly unsympathetic to sick people around you?

Anyhoo, Troy thankfully felt better mid-way through the next day, but Jack then came down with something of his own. It wasn’t what Troy had, but it was sure was something. Jack is the version of me before my parents killed my health-related drama. A paper cut can make you think that his limb was amputated or something. Troy was ill, so I needed to keep away from him and grabbed Jack’s extra mattress from his trundle and bunked on the living room floor. With Jack waking up in a drama-induced hissy, I needed to stay close to keep him quiet so Troy and Bennett could sleep. The living room is too far away from his room, and I didn’t want to actually be IN his room, breathing his sick air. So, from 2:30 am – 5 am I ended up hunkered down in the hallway. So cozy. 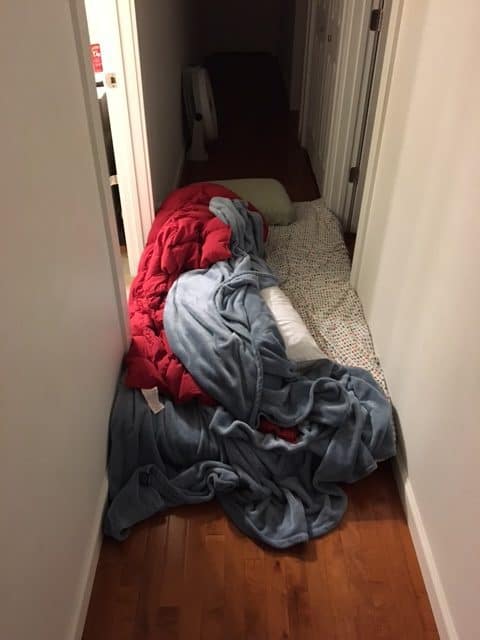 A low grade fever turned in to a higher fever, which turned in to a trip to the pediatrician on Friday. Diagnosis: not sure. Rapid strep was negative, it’s not the flu, and it could be laryngitis. Rest, fluids, Redbox, and Motrin are our current weapons of choice.

So, Thanksgiving went from my Super Bowl, to shuttling plates up and down the stairs to keep the sickies away from my parents. We had all the food I made for the big event, and ended up freezing my 22 lb free-range turkey. My dad had been smoking a turkey breast to add to our big family dinner anyway, so we just ate that and called it a day. 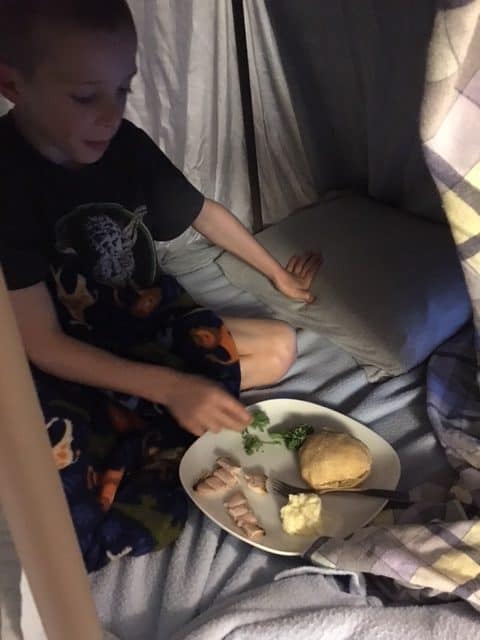 We let him eat Thanksgiving dinner in a blanket fort while listening to Brains On!

I had made four, count them, four pies for our holiday, as well as the day after event at my sister’s house. Which we also missed. Wednesday night, I sat in my clean house while everyone slept, and had myself a pity party on the couch. A pity party, and one-fourth of a pecan pie. Which I washed down with sparkling cider. And breakfast the next day? Apple pie and bacon. Yeah it was.

If anyone wants mashed potatoes, I have about 15 gallons of them.

Everyone is on the mend, and knock on wood, Bennett and I came out of this plague unscathed. I kept Jack and Troy away from my parents for the most part, and they also remain “healthy”. And yesterday, I did five loads of laundry with all their sheets, bedding, quilts, comforters, etc. Scald them germs.

My mom unearthed some of her old Golden Books recently. The titles and stories in these books from the 50’s are pretty hilarious, and often kinda creepy.

What the bunny FOUND OUT, on a very special Dr. Phil: 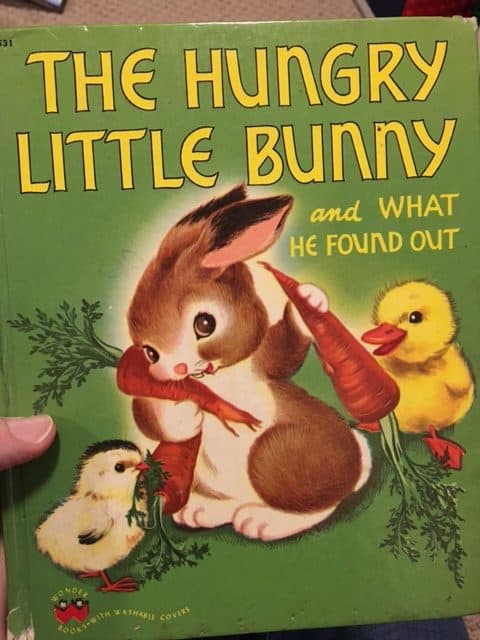 I am assuming this is what the screenwriter of Seven read every night as a little kid before bed. 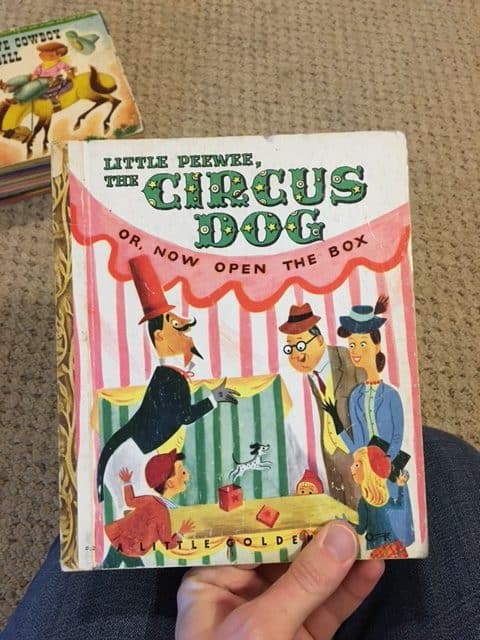 Did any of you go Black Friday shopping? I’d rather get a breast exam from Freddie Kruger than venture out in to that mess. I’m an extrovert and have no problem with large groups of people, but I have a real problem with large groups of idiots. Black Friday sales, theme parks, and Costco on a Sunday tend to be chalk full of people who don’t know that standing in the middle of the f%&ing walkway is a problem. It’s safer for me, and therefore the public for me to stay home. I did spend the hell out of a gift card online, and scored over $140 worth of stuff for a whopping $.04. I bought Bennett some books, additional art for his room, a little stuffed animal to unwrap on Christmas, and snagged a gift for my friend’s baby. Troy and I don’t really give our kids much on Christmas or their birthdays. They’re spoiled out of their minds by grandparents and aunts/uncles, and frankly I just find that they get overwhelmed by it. We were broke at Jack’s first Christmas, and he didn’t really understand much, so we got him two actual TV remotes from Goodwill. We ran them through the dishwasher a few times, wrapped them in a bag with a lot of tissue paper, and called it a day. He was thrilled and it was exactly what he wanted. If I could wrap up Jack in a big gift bag, that would make Bennett’s year, and would be all he could ever hope to get.

I prefer to spend more on our giving tree kids than my own spoiled little “want for nothing” spawn. This year, Jack picked a tag at school for a three year old boy, and we selected a 16 year old teen boy from the tags at church. I have much more fun shopping for them, than for our kids. The 16 year old boy requested a pair of jeans, but I like to always get them something in addition to what they request. I don’t know any 16 year old boys, so I wanted to thank everyone who follows this blog on Facebook. I asked for some suggestions yesterday, and man you all came through! Some common suggestions were: snacks, gift cards to the movies or fast food restaurants, socks, deodorant, and body spray. As the sister of someone who teaches high school, I can’t get behind adding more fumes of Axe body spray to the hallways of the local schools, but maybe something more subtle like Men’s Dove products can be arranged.

Meal plan time! My mom’s best friend, and the reason I am named Sarah is coming in to town to visit my mom this week! She’ll be with us Tuesday through Thursday, which means I get to share food with more people – my true love!

What are you having this week? How was your Thanksgiving?