We braved some crazy rain and wind on Friday to go to the memorial service for my mom’s uncle. His kids selected a medium-sized building at a park to house all the people they thought would come. They grossly underestimated how loved he was. It was standing room only.

What a testament to an amazing man.

Over and over again, people started stories they were sharing about him with “he was so nice”, or “his sense of humor”, or “his friendly smile and positive attitude made my day”. It was an overwhelming amount of awesome. The family gave out bookmarks with some of his sayings on them, and they all struck me as things that make others feel important, happy, or special. Someone at the memorial commented “the only people who weren’t Jim’s friend, were the people he had not yet met”. Members of the staff from his assisted living facility came (an administrator, the owner, a cafeteria server), and one of them got up to speak. He said something they heard from Jim every day was when he asked the staff “what are you doing to make people happy today”? He didn’t say it in a judgey way, but was genuinely interested to hear how they had improved the lives of others that day. He lived to make others smile, and bring joy to all.

If that isn’t a velvet soft but powerful reminder on how to live life to the fullest, I can’t think of what else is.

The following few paragraphs are my opinion about my own situation and our family dynamic. They are in no way a reflection of you, m’kay?

I recently had an opportunity to return to work part-time. I was invited to apply for a short-term, 24 hour a week job at my former employer. A colleague is on medical leave and they needed someone to fill in during the meantime. I could have done much of the work from home, and my in-laws were willing to watch Bennett for a few hours a week so I could go in to the office and really hunker down and get some work done. The money would have been decent, and I mentally had it spent on a wood stove, new carpet for the basement and stairs (it is so ugly and horrible you guys, you have no idea), beefing up the emergency fund, and paying down or off Troy’s truck. The work itself would have been uninspiring and stressful. My colleague had the job I always joked “I would never touch with a ten foot pole”. But, I was willing to do it, and it wouldn’t have lasted forever.

I took some time to think it over, and could not make a decision. Knowing my mom was facing new health challenges weighed heavily on my mind, but also being able to help out my colleague would have been huge as well. When I initially brought it up to Troy, he said I could do whatever I thought best, and he would support me however he could. Weeks went by and some days I was 100% decided that I was going to take the role, and then the very next day I was 100% certain I knew I could never make it work. My working outside the house routine is so ingrained in me, that I still get up between 4:30 and 5 am every single day and hit the ground running. I rarely sit down, nor am I in bed before 10 pm most nights. And I still never accomplish half of what I set out to do that day.

Troy and I had a super long conversation about it last week. It was one of those discussions where you’re fairly certain you will never stop talking yourself in circles. I was so unsure of what the best route was to take, and I doubted if I ever would feel comfortable with the outcome. A few things came out during out chat that I had been feeling for a while, but had never articulated. For one, I think I was leaning towards the job because I have a really hard time not working. I’ve had some form of a job since I was 13. I’ve always worked. Working, and working hard at a traditional “job” is what I do, and a part of who I am. It wasn’t until that discussion that I realized so much of who I am has always been defined by what I do. And not having that “ownership” and an easy to explain role title was leaving me floundering. I have yet to update my LinkedIn account, because I can’t figure out what to put in the company or position fields.

I recently made some cookies for someone, and was asked how they could taste like “normal” cookies, but were really whole wheat. I shared the recipe, but the person kept saying “yeah but it tastes different than normal cookies”. I told them I made my own vanilla and brown sugar, so maybe those flavors were adding another layer of something to the cookies. The very well-meaning person took another bite of the cookie, and said “do you work outside the house? Who has time to make their own vanilla and brown sugar”? My face got so red ya’ll. I stammered a bit and couldn’t really answer the question. Because every part of me wanted to shout “it’s complicated, but I did ALL that stuff before when I worked full-time”. There is so much of me that is tied up in the whole persona of trying to juggle so much, commute, work, blog, cook, garden, blog, can, blog, steal fruit from neighbor’s trees, etc., and I was always proud that I managed to keep my head above water for so many years. I feel so protective of all the hats I wore back then, and carrying the banner for so many others out there who day in and day out, slogged their asses in to the office when they were sick, sick of work, and sick of feeling exhausted by responsibility.

Quitting work was/is an exciting journey for me, but one that left me trying to find a new identity. This isn’t a “whaa whaa, poor Sarah” kind of post. I’m not whining about the incredible opportunity I have been given, but more of a “I need to take ownership of my feelings, because I’m confused AF right now”. I do not devalue any work that other stay at home parents are doing, so please don’t think that is what I am saying. But trying to find my place without a resume worthy job title is taking some adaptation for me.

In the end, Troy and I collectively decided that the timing was not right for me to take the part-time job. We took forever to come to that conclusion, but we did so with a few stipulations. 1) if I was willing to carve out the time to put in 24 extra hours worth of work in a week, I should be willing to devote some of that time to pulling the trigger and blogging more, bigger, and deeper (that’s what she said) 2) Troy and I have had a plan for years to write (Troy draws, I write) a graphic novel for advanced readers that are age appropriate. To date, we have done two things with this idea: jack and shit. 3) In spring, if Bennett is mostly weaned during the day, I’m going to sign up to be a substitute teacher in our local school district, with the plan to sub one day a week. The money is not great (hello education), but it will get me back out there and let me feel like my skills are still fresh.

By not taking this job, we are forcing ourselves in to a position where we need to put in the work to make some really cool dreams come true, because otherwise it would just be another missed opportunity. And we would have only ourselves to blame.

Remember the other week when I said my parents always seemed so adult to me and had their shit together? I still don’t feel like we have our shit together, but I do feel like we were very adult in making a decision that was best for our family, and not our bottom line. For way too many years of our marriage, money has been what drove 90% of our decisions, and that gets really old, really fast. Being a grown up is challenging people!

There are two main roads that will bring us to our house. I prefer one road because the speed limit is faster and the view is gorgeous, but for whatever reason, Jack constantly asks us to take the other one. I dislike this road. It doesn’t follow along the water, the houses are uglier, the speed limit sucks, and it’s just a boring stretch of pavement. My route is how I like to live life – being surrounded by lovely sights, and at a fast pace. Jack’s path is boring, slow, and plain, but gets the job done. When taking Jack’s way, right before we turn to our neighborhood, there is a tree that always takes my breath away in spring and fall. It isn’t large, or grand, but it is simply stunning when the seasons are changing. When I see it, my heart catches just for a second, each and every time. It’s a good pause in my day to remember that even the boring, slow, and lame parts of life have some beauty to them. 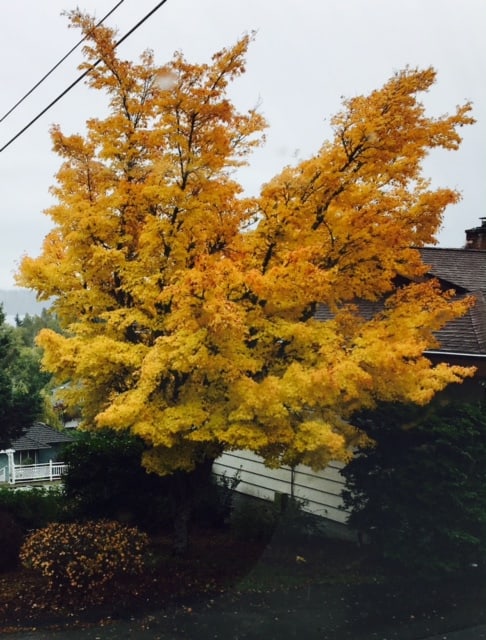 In honor of great-uncle Jim, I hope each of us spends a few minutes today and every day trying to remember what it is we did in the last 24 hours to make someone happy.

Monday:: Something called “rice in the oven” from my friend Angela. We were texting last week about a recipe I was trying to create in my head, and she was like “b, please, that is a Maltese dish my family always makes. You’re not original”. Ok, it wasn’t exactly like that, but she did share the recipe with me. 🙂

Tuesday:: Roast chicken, mashed potatoes, and roasted broccoli (yes, I do dislike broccoli, but oddly enough, Jack has decided he likes it, so we’re running with that. I will take my no thank you bites and move along.)

Wednesday:: Chicken gnocchi soup and salad. This was supposed to be made last week, but life happened, and it didn’t. The chicken in the soup will come from the leftover roasted chicken.

Thursday:: Beef stew in the crockpot. I just made this two weeks ago, but we have all the ingredients (read: cheap meal), and the weather is going to suuuuuuuuuuuuck this week. Stew sticks to your ribs and makes you feel happy. We’ll also have dutch oven bread.

Saturday::A form of soup…we’ll see what has survived in the fridge and needs to be “brothed“.