Learn how easy indoor seed starting can be! Seed starting is the most economical way to grow a healthy and diverse garden this coming year. A few simple tools and know-how will help you start your garden off on the right step.

The first few times I started seeds was when we lived in Los Angeles.  I had nothing more high-tech than a south-facing window and still probably had a 95% germination rate. Oh, my how easy it was to garden in Los Angeles. Well, except for the watering – goodness I hate to water!

Seed starting is very cost-effective and allows you to grow many unique plants that you won’t find at your local nursery, Lowes, or other big box stores.

Technically you don’t need anything fancy to start seeds, but I need something brainless since I’m not home often enough to babysit these little guys.  I had an older version (circa 2006 or 2007) of  this seed starting kit from Gardeners.com, but my system came with a little water indicator thingy.  I lost most of the parts in our various moves, so I splurged for the new system this year.  I love that it came with the coconut coir brick.

Many seed starting “soil” recipes include peat moss.  Peat moss is a nonrenewable material that is super harmful to the planet when it is harvested.  Plus, someone told my kid that peat is decomposed dinosaurs, so buying a bag of “Buddy, Shiny, Tiny and Don” from Dinosaur Train would not be popular in my house.  Rather than destroying my child and the earth, I’m giving coconut coir brick a shot this year!

Perlite (the white fluffy things in store-bought soil.  You can find it at any garden store) ~$4.50
Seed starting soil (I used Miracle Gro organic because I couldn’t find anything else at my store) ~$5.25
Coconut coir brick
*I tried to find worm castings to use in this, but they didn’t have any at my store.  I’ll fertilize in a few weeks to make up for the loss of castings.

1) Place the coconut coir brick in a bucket, and add some water.  Let it soak a bit, and then break it apart.  Keep adding water and breaking it apart until it is damp and loose. (too obvious.  I would feel cheap if I even added a “that’s what she said”).

2) Add some of the seed starting soil, and mix until the coir and soil have combined.

3) Add water to the mixture if needed.  Grab a handful – it should form a ball that feels like crumble chocolate cake.  If it ball holds its shape (hee hee) when squeezed (OMG), chances are the mixture has too much water it in.  Let it dry out a bit.  If the mixture doesn’t even form a ball, you’ll need to add more water. 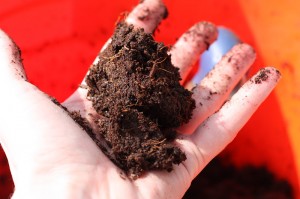 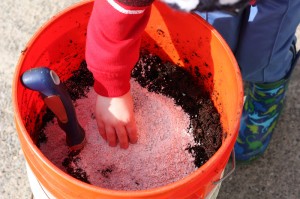 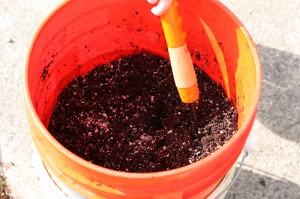 5) Let your finished soil sit for about an hour or so. 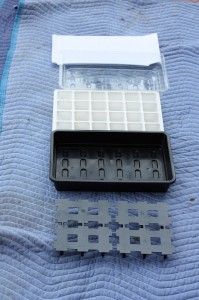 The black tray (reservoir), is the base and will hold all the water for the seedlings.

Wet the white sheet (it feels like felt) and place one side flush with the top of the spiky mat, and the other end should be fitted under the spikes. 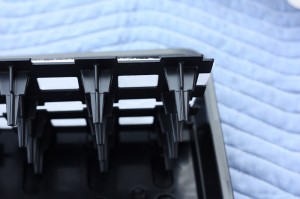 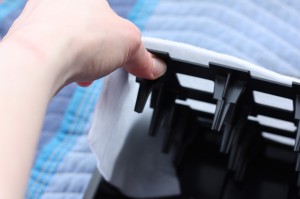 Place that in the black tray. 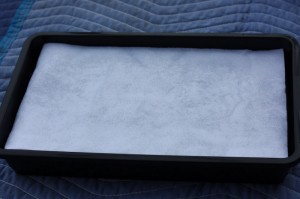 Put the white plastic tray on top of the white sheet. 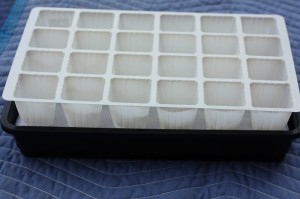 Fill with the seedling mixture.  I like to put shovefuls of my seed starting mixture in the middle, and work it in to the compartments by hand.  You’ll want to push the soil down so that each compartment is full, but you don’t want to compact the soil in too much. 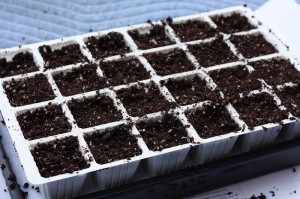 Planting the seeds
You’ll need:
-seeds (no brainer)
-a pen
-a stick, tape, or something to mark which seeds are which

In the past I’ve always used Baker Creek Seeds, but Erika over at Northwest Edible Life recommended Territorial Seeds, so I thought I’d give them a shot this year.  So basically if my garden sucks, it’s her fault – not mine! ;-D 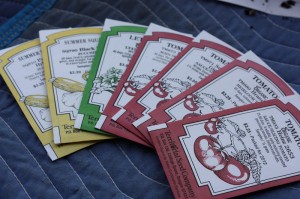 Most of the seeds that I ordered this year don’t need to be “started” or shouldn’t be started this early, so I may have “over-sowed” a bit this year.  Oh well, I can always give them away when they’re bigger, or just go nuts with planting and hope for the best.  Given that I have so many holes in the tray, and so few seeds that needed sowing, I only did one seedling per “cell”. 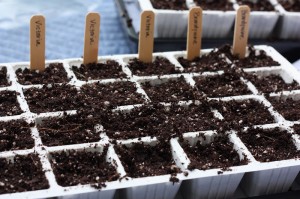 I simply sprinkled one seed per cell and then lightly covered with more soil. 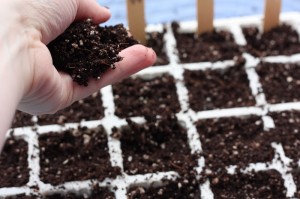 We have tons of windows in this house, but most face north.  I chose a sunny southwest facing sliding glass door for these babies.  Lay a towel down to protect the carpet.

Cover the seed trays with the plastic domes and rotate them each day so that one side doesn’t get more sun than the other.  I put a towel against the door at night so that cold air isn’t blowing on the trays.  Once the seedlings come up, I’ll remove the domes and place a grow light that I bought using Amazon giftcards that I earned via Swagbucks, otherwise I wouldn’t have been able to afford it. 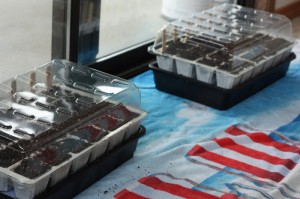 Make sure you add water to the reservoir once the water level drops.  It’s best to water the seedlings from the bottom instead of overhead watering. 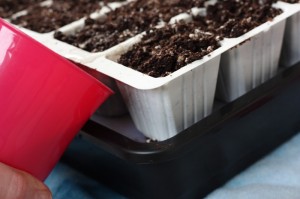 Now, assuming I don’t kill these seeds, we’ll have another post in a few weeks about up-potting and stuff.  I’m sure you’re all on the edges of your seats!

16 comments on “Seed Starting – How to Start Seeds Indoors”