The Six Month Breastfeeding Slump Can Kiss My Grits

I made the mistake of assuming that by staying home with Bennett, I wouldn’t run in to all the same breastfeeding issues I had with Jack.

Sigh. Naivety is a powerful deceptor.

Working full-time, commuting two and a half hours a day, and pumping four times a day with Jack was a slog, but I did it, and I did it for year.  Thankfully, I was going through it at the same time as my buddy Elaina.  Misery loves company.  Elaina named her pump “Pump Vader” and had visions of running it over with a car.  I daydreamed about using a steam roller.  Pumps are a wonderful tool, but can also make you feel tied down, beholden, and ready to give up and find an alternative.

There is also a “super fun” time that many woman experience while pumping called the “Six Month Slump”, when basically your supply drops, you get stressed out, the hormones from the stress further impacts your supply, and you start a downward spiral in to a major freak out.  It sucks, and because of it (and many other reasons, including a growth spurt), six months is about the time when many women give up breastfeeding.

I think breastfeeding is rad, and support any woman’s right to do it.  But, my support and enthusiasm in the past has been misdirected and off-putting to some of my friends.  I totally approached in from a place of trying to be helpful, but it came across in the wrong manner.  So bottom line, feed your baby how you need/want to.  Breastfeeding is only best for the baby if it also is best for the mom.

About a month ago, I noticed my clothes were fitting a bit more tightly.  With both boys, I was in a position where I lost all my baby weight very quickly.  With Jack, he had dairy issues, causing me to be dairy-free, and further losing weight.  I hated how I looked at that time; I was much too thin and so tired, and looked strung out.  This time around, I lost the weight just as quickly and gave up dairy for six weeks, but added it back in when it didn’t seem to make any difference with Bennett’s reflux.  When I put on my pants one day and realized they were not fitting the same way, I knew I likely wasn’t burning as many calories from breastfeeding…which led my thinking to go to a place where I wasn’t making as much milk.  Bennett had gone from eating on just one side, to needing both sides to feel full. I had been pumping occasionally up until then, and noticed a precipitous drop in production.

Just like with Jack, I rallied my weapons and added a few new tools, and I do believe I’m finally on the upside of things.  Below is my arsenal round-up of how I got through this slump. 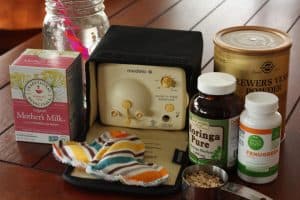 Education
During our Bradley Childbirth classes with Jack, we had homework assignments each week.  We had to read The Womanly Art of Breastfeeding from the lactovists (aka LLL) which despite having the world’s douchiest name, was a super helpful resource for me for Jack, and now for Bennett.

Kellymom: this website has always had the answers I needed related to breastfeeding, and I trust the resources.  I never read the parenting content, because generally, I find any online parenting content makes me feel a giant failure, and is a guaranteed sad bastard moment.

Liquids
Gotta drink water.  You can’t get around it.  Your body needs extra liquids when you’re nursing, and damnit, you need to be drinking water anyway.  So do it.  The literature says “drink to thirst”, but I’m naturally thirsty, and know that when I am nursing, I need a minimum of three liters (three-fourths of a gallon for any American like me who never understood the metric system) of water a day.  My ideal is four to five liters.

Mother’s Milk Tea is something I used with both boys.  I don’t love the flavor, but with a drizzle of honey, it’s totally fine.  My preferred method of consumption is to brew a giant jar of sun tea with honey added, and drink it as iced tea. My liquid consumption starts with a quart of water in the morning, then two quarts of Mother’s Milk iced tea, and if I am still thirsty, I finish the day with another quarter of water. 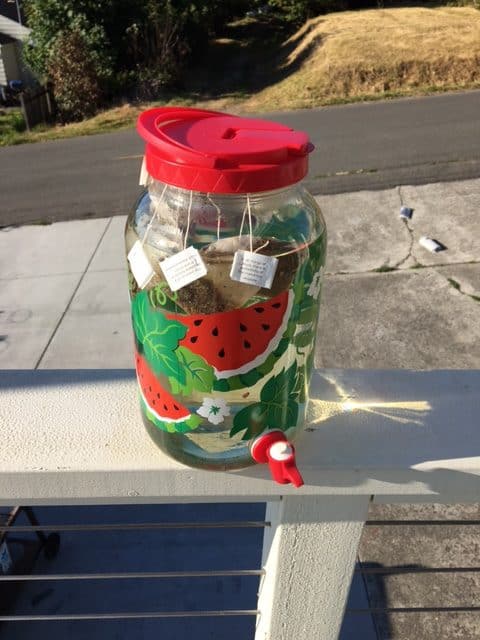 I’ve always been fine with plain water, but when I feel like I need to jazz it up a bit, adding fresh fruit or flavored ice cubes gives me something new to drink.  My favorite is to heat fresh lime juice, a pinch of sugar, and some mint, and then freeze it in ice cube trays.  Remove to a ziploc, and boom, mojito ice cubes.

Food
I had to take a hard look at my diet when my supply dipped.  You need about 500 additional calories per day when breastfeeding, and mine was coming in the form of Nutella.  Did you know Costco sells a giant two pack of Nutella for $11.99?  Yeah, I wish I didn’t know that either. I did what I always do when wanting to get back to feeling good in my clothes, and I cut out sugar.  Within two days of doing so, my supply tanked even more!  So, I need some calories from sugar, but I also needed to find better sources for feeding my body the good stuff so that I can produce the good stuff.  Now, I am still eating sugar, but other than a splash of chocolate cashew milk (it is amaaaaaazing by the way) in my small glass of iced decaf coffee in the morning, I restrict all sweets until the end of the day.  I try to enjoy desserts that also give me protein with the calories, so a heaping tablespoon of peanut butter with some chocolate chips and pretzels for dipping is pretty much delicious and hearty.

I also added oatmeal back in to my breakfast routine, as oats are known to help boost breastmilk supply.  Thankfully, I love oatmeal, but I am only eating it as part of my meal, because it is never enough to make me feel full.

With dessert, I will often have one of my homemade lactation cliff bars/cookies, which are both delicious and chock full of milk boosting ingredients.

Pumping
Eff you pump.  Eff you so hard.

I’m blessed to have a pump, and thanks to the Affordable Care Act, I didn’t have to shell out another $250 for the good pump.  I see the whole blasted machine as a necessary evil; like that stupid puff of air in your eye at the eye doctor. I don’t have to like it, but it does its job.

At the tail end of pumping for Jack, I was at an all day conference in the city as a vendor.  After months of a declining supply, I pumped in a broom closet, and was so thrilled to get a decent amount.  I got home that night after battling traffic for hours, only to realize my pump and precious milk was under the table.  And it was Friday.  And the place was closed all weekend.  I cried so very very hard that night.  So hard.

Generally, boobs are a supply and demand kinda thing. If your baby drinks or you pump 4 oz one afternoon, your body will make about 4 oz around the same time the next day. So, by pumping even after your baby has eaten, you’re essentially trying to trick your body to produce more.  Got it?  You’ve all passed Boob 101.

Currently, with my supply dip, I pump at the end of the day, and when Bennett wakes up around 3 am ish to eat.  Hands down my best pumping tip came from my friend Colleen, who told me to simply store the pump parts in a large lidded container in the fridge for the day. Not having to wash the parts in-between each pumping session, makes me hate it a tiny bit less. But just a tiny bit.

I’ve always had great success with the pump, and can get it done fairly quickly. Many of my friends haven’t been so lucky, and can some times be hooked up to that thing for 40+ minutes. Even with my ease with pumping, I still jumped at the chance when blog reader Erin asked if I wanted to try some pumping helpers from her Etsy shop, Letdown Loveys.  I know, the name is amazing, right? The loveys are microwavable aids that you place in your bra before pumping that help you have a more comfortable pump, and can help you reach letdown earlier and/or have a more productive pumping session (TWSS).

The loveys are made from crazy soft fabric, and fit easily in your bra.  I wear mine while locking up the chickens (they’re super impressed), and then I come in and do my nightly pumping.  The first night I used them, I noticed a slight increase.  The next night, I noticed the same thing.  And the night after that, etc.  Not a huge increase, but 0.5-1.5 oz per night, and that adds up.  When every ounce counts, it was a nice little boost.  While not included in the lovey directions, I could also see these being used as a small heatpack for boo boos or for sore muscle for kiddos. Letdown Loveys are available in lots of great fabrics, and I’m so appreciative of Erin sharing them with me.

Supplements
Fenugreek: I take three capsules, three times a day.  Basically at meals, because it is easiest to remember that way. There is no taste, but it has an added benefit of making your sweat smell like maple syrup. I just place small pancakes in my pits, and at the end of the day, I can have a delicious treat.

Moringa: this was recommended to a friend of mine by her lactation consultant. The fenugreek on its own was helpful, but adding the moringa was the perfect boost.  It has a bit of a grassy scent, but there is no taste, and as far as I can tell, no side effects such as smelling like the Canadian flag. I take two capsules, three times a day with the fenugreek.

Brewers yeast: do NOT confuse this with nutritional yeast. Brewer’s yeast has an odd taste, but I can’t explain exactly what it is like. It’s not horrible, but it needs to be mixed with something that has a stronger flavor, preferably sweet. I mix it in my oatmeal in the morning, and in homemade lactation cookies. It can make some babies colicky, so just watch for reactions.

Sanity
The most important thing when going through a slump or a downturn is to be kind to yourself. This crap can be really hard, emotionally draining, and super stressful.   Babies and boobs do not come with user manuals, and thus, some times you are left to figure this crap out the hard way. Providing yourself with some grace can and will go a long way to keeping your head on straight. And if all else fails, Costco sells Nutella.