The changes of life

No, I’m not talking about that change of life.  As much as I’d like to save a fortune on feminine hygiene products, I’d love to have another kid at some point.

The changes I’m talking about today are the household items that we use and change out.  I’m not here as an expert, but rather a curious observer who is interested to hear if our practices might be similar to yours.  Feel free to weigh in with your family’s habits.

Sheets
We change our sheets once a week.  I accidentally typed in once a month, and then I puked in my mouth a little bit and thankfully caught my error.

Due to Troy’s severe allergies, we have a mattress protector to keep dust mites away from his precious skin.  I call it “the nerd guard”.  When we got our new mattress in 2009, I spent the extra money to get a top of the line mattress cover that isn’t really plastic, but protects just as well as plastic.  The old protector we had rustled any time you moved around.  I was so sick of feeling like I was sleeping on rubber sheets.The mattress protector and pillow surrounds gets washed once a month.

Comforter
Back in October, I got the world’s warmest comforter from IKEA.  This thing is HUGE, and as I found out, too huge for even our large washing machine.  Now, I put it in the dryer every two weeks on hot for an hour (ah, the electricity.  It hurts.) to kill any allergens.  I’ll need to take it to a laundromat or something to really deep clean it.

Bath (shower) towels
Every four to five days.  Troy likely thinks he uses the same towel for months at a time, because I just change them out with fresh ones without consulting him.

Kitchen rags
I used to be addicted to bleach wipes, and then I paused to think of the huge ecological issue with these things.  Not to mention the freaking cost of those things!

I weaned myself off of them, and use rags and homemade surface spray now.  I have terrycloth washclothes from Target.  They can be kinda hard to find.  They’re usually around the bath section, on an end cap, and have a white ribbon holding them together.  They come eight to a pack for about $5.99 ish. I buy three packs for a total of 24 rags (math is hard).

I replace my kitchen ones every year, and then they are regulated to junk/bathroom cleaning rags.  When I buy new ones, I buy them all the same color, but different than the previous group’s color.  Why?  So that if Troy is folding towels (I laugh at the thought), I only have to say “the gray ones go in the kitchen”.  I don’t wash kitchen and bathroom rags together (puke!), but if they weren’t color coded, my new kitchen rags would end up downstairs with the bathroom cleaning rags.

In a typical day, I’ll probably go through about three to four washclothes in the kitchen, and two to three hand towels.  I cook and clean a lot, so they get quite a work out.

Rather than walk myself downstairs to the washer, (first world problems) I keep this bucket near my fireplace, which is in fabulous rag tossing distance from my kitchen.  I found the bucket at a garage sale almost three years ago.  There is a woman who lives a few blocks away who stages expensive homes when they are on the market.  After the house is sold, she hosts big garage sales and sells all the never-used products.  I’m sure her fancy clients would be horrified at the second life of their previously never used wine bucket for their Town and Country staged BBQs. 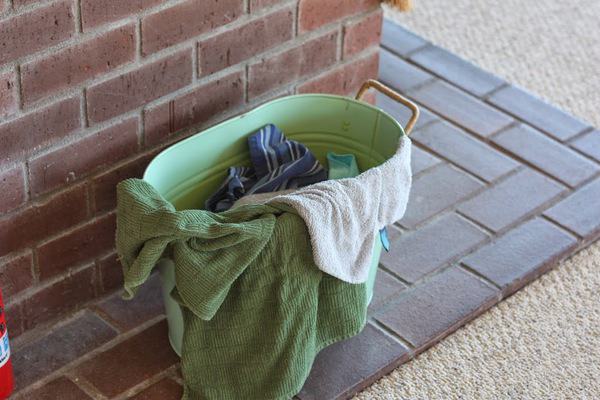 The contents of said bucket get washed when the bucket looks like it threw up rags.

Underwear
We’re supposed to change these? (edited to add: you all know that is a joke right?  I change my underwear at least once a day!)

Bras
Despite Carrie’s mom calling boobs dirty pillows, boobs aren’t really dirty.  Hence I probably wash my bras once a month.  If that.  Did I just say that?

Jeans
I tend to wear my jeans three or four times before washing them.  Unless someone wipes a booger on them.  TROY.

Oil
The dealer where I bought my used car recommends every 5,000 miles, and since I have 13 full-service oil changes for free, I listen to them!  Every oil change comes with a car wash, a vacuum, and a free latte for me.  Deal!

Toothbrushes
We have a Sonicare Elite that is really old, and no longer even has an “on/off” button on it.  You have to stick your pinkie finger in to the body of the brush to turn it on.  But it works, and my teeth feel crazy clean, and people often compliment on my white (non-bleached) teeth.  Like a commenter on this post about homemade marshmallows.  That’s right folks, I’m tying clean teeth in to a post about sugar fluff. 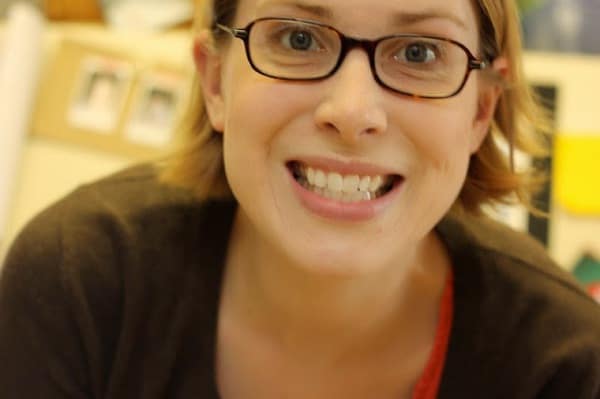 The Sonicare heads get switched out every six months.

Contacts
So…um, I have a total crush on my eye doctor.  He’s like 50, and stuff, but we spend the entire time quoting 70’s movies and laughing.  We’re likely too busy cracking up for him to even really pay attention to my eye exam.  Every two years, I go in and I declared blinder.  My last visit went like this:

Doctor: How are your eyes Sarah?
Me: Well, about 3 months ago, my vision either got worse, or I had a stroke.  Either way, I can’t see for meerkats.
Doctor:  Yikes, let’s get you some new contacts to test out.
Me: Thanks doc.  And can I please borrow your towel, my car just hit a water buffalo.

Anyway, I have monthly contacts, but since I rip them out of my eyeballs the second I get home, and wear my glasses, I tend to um stretch how long I should be wearing them.  Let’s just say that my insurance will pay for one years worth of contacts, every two years, and um, I’ve never paid for contacts before.

My glasses are from 2000 when I graduated high school, and I can still see awesome in them, despite the fact that they’re pretty scratched.

My sewing machine needle
I once read a blog post where the author recommend you change your needle with every new project.

I wanted to ask her if she had a money vault like Scrooge McDuck and went swimming in it every night.

I have changed my needle all of twice, and that is because they broke both times.  Likely from lack of changing.

Bathroom hand towels
Can someone explain to me how a four year old (almost five year old) can read Harry Potter with literally no help from an adult, but cannot for the life of him hang the hand towel back up in the bathroom?  Between the top of the vanity looking like a baby seal had a seizure in my sink, and the hand towel wedged in the space between the vanity and the door (how does that EVEN HAPPEN???), I’m tempted to completely remove the hand towel from Jack’s bathroom.

That being said, those get thrown in the wash every two to three days.

Anyhoo, I’ve literally aired my dirty laundry.  Now it is your turn!  Do our habits match up to yours?  Are we weird?  Are YOU weird?

Yo yo, head’s up, this post might contain affiliate links which help to support my site. And my canning, seed buying, and aggressive saving habits.
originally posted on March 19, 2014; Updated on March 23, 2018
19 Comments//Leave a Comment »
Categories: Uncategorized
« Previous PostMeal plan for March 17th – 23rd
Next Post » Meal plan for March 24th – March 30th

19 comments on “The changes of life”