First Time Visiting? Start Here!
Home » Uncategorized » The Damn Pound Cake. On Why You Can’t Win Them All

The Damn Pound Cake. On Why You Can’t Win Them All

Today was my coworker’s birthday. I’m usually in charge of making desserts…because no one else thinks of it. It went horribly wrong last night. I wrote the following up this morning and gave it to her.

Once upon a time, in the kingdom of Seattle, lived a woman named Carol. Carol was kind, thoughtful, hardworking, fan of open potlucks, eater of dense non-chocolate cakes, dependable, hilarious, and lover of Oxford commas.

On the other side of the kingdom, lived a silly girl named Sarah who loved Carol and wanted to celebrate her birthday in style. Sarah found a recipe for a pound cake, and despite never having made a pound cake before, thought “how hard can it be”?

It all started innocently enough. The butter and sugar were whipped in to a light and fluffy frenzy. Ingredients were carefully added one at a time, and instructions were followed to a “t”. The world was good.

Things started going wrong when the batter was placed in to the bundt cake pan, which despite being the size called for in the recipe, was clearly not enough “pan” for the “cake”. No worries though, a cookie sheet placed on the oven rack below the bundt pan easily caught the pound cake “cracklin” that was dripping out and over the sides.

The cake was baked, toothpick tested, and then cooled for the dictated time. Sarah was overjoyed at how beautiful it looked, and the smell of the delicious concoction filled her humble castle. She carefully turned the cake over on to the cooling rack (as directed), and then happily set about washing the bundt cake pan (since being a “clean as you go cook”, the rest of the kitchen was already spotless).

She was alerted that something was critically wrong, when over the sound of the faucet, she heard “splot, splat, sploot”. She was dismayed to turn around and see the pound cake essentially peeing cake filling on her counter. “Oh no” she cried, and nary a swear word was uttered (cough cough) as she desperately tried to salvage Carol’s birthday cake. Sarah called out for the brave Sir Troy to come and rescue the weeping dessert. In a team effort, they (with clean hands), hauled the cake back in to the cake pan. Sarah put it back in the oven, and prayed.

After a full 30 minutes past the recommended baking time, the toothpick test yielded a “fairly baked” pound cake. In a haze of exhaustion, Sarah put the cake back on the cooling rack, leaving it IN THE DAMN PAN this time, and set her alarm for 12 am.

At the stroke of midnight, Sarah awoke and blearily stumbled out in to the kitchen. She worked a pastry knife around the edges of the pan, placed it on the cake holder base, and waited for the pan to release Carol’s now (likely) ruined birthday cake.

At 12:10 am, trying not to wake every member of her household, Sarah realized with a sickening feeling in her gut why it was called a “pound” cake. No, the name didn’t come from the amount of ingredients used in the batter, but rather the amount of force it would take to remove said cake from the f#@&ing pan!!!

Cake safely removed, much worse for the wear, Sarah enclosed it in the protective cake carrier and made her way back to bed. And the tale of the world’s most lovingly and terribly made pound cake came to an end.

While the cake is likely dry, hard, and inedible, the effort and thought that went in to it was well-intentioned. If all else fails, the fair Carol can drink the strawberry simple syrup made by Silly Sarah’s very incapable hands. 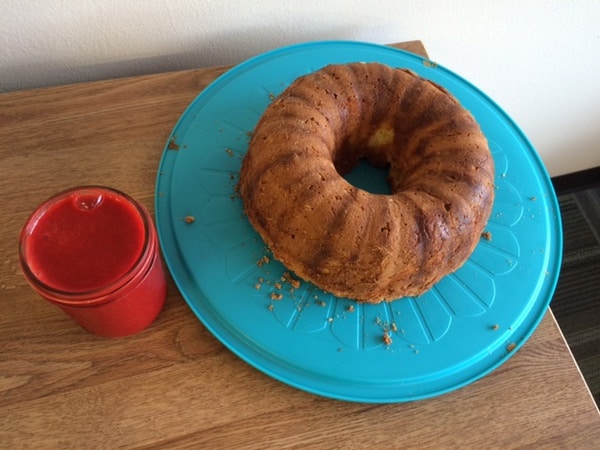 7 comments on “The Damn Pound Cake. On Why You Can’t Win Them All”