The Garden in July

My garden is pretty gross right now.  There is spring stuff waiting to be ripped out, red clover and morning glory (assholes) everywhere, and just a jumbled bit of chaos.

But there is beauty in that chaos, so we’re all good.

If you want perfection, and families in homemade clothes harvesting their bounty in home-woven baskets, well, there are some sites I’d be happy to direct you to.  🙂

If you’re cool with some junk, some weeds, and 22 blueberry bushes looking like they’re about to walk down the aisle, then you’re in luck.

One thing that always gets asked of me is “how big is your garden”, to which I reply “not quite sure.  Not big enough for everything, but big enough for a little of something”.  My friend Elaina visited in January 2014, saw my garden area and said “this looks a lot bigger on your blog”. I promise you it’s not.  But we use every inch possible (that’s what she said) to our advantage.  Our whole property is less than one-fifth of an acre, and most of that is taken up by house, gimp paths (wheelchair access), a chicken coop, and the side of the house where nothing will grow.

This is my largest planting area, that currently holds 15 tomato plants.  If I had an acre for gardening, I’d multiply that by five and have 60 plants for preserving, donating, and shoving in to my caprese salad hole.  But I don’t, so I cram as many tomatoes as I can in to this area, and call it a day. 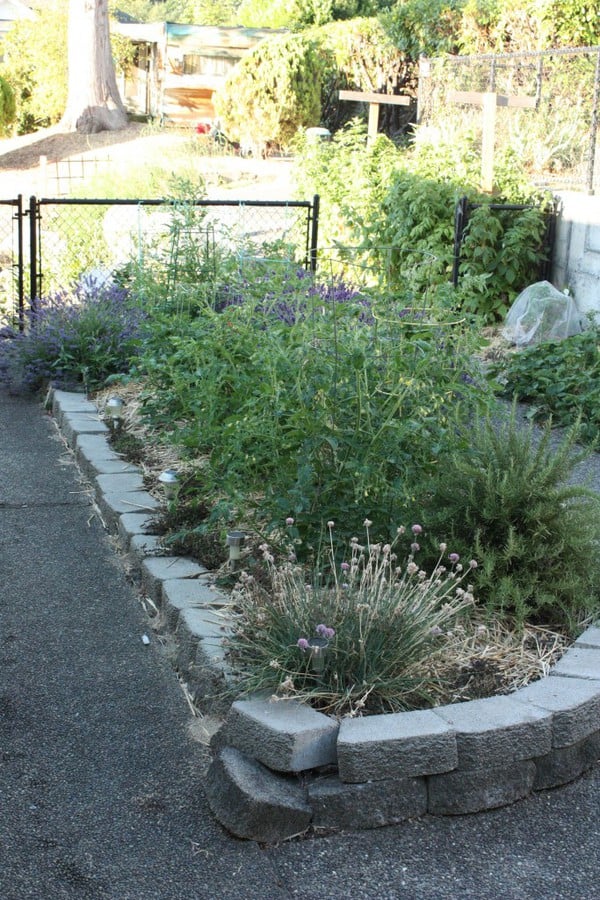 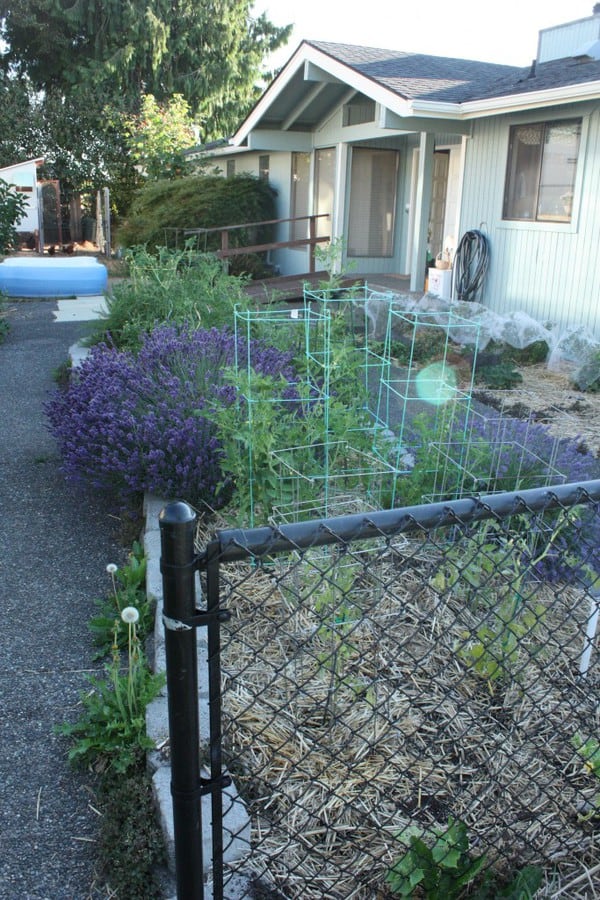 I also have a perennial rosemary bush (purchase from Trader Joes two years ago.  Excellent return on my $8.59 investment! 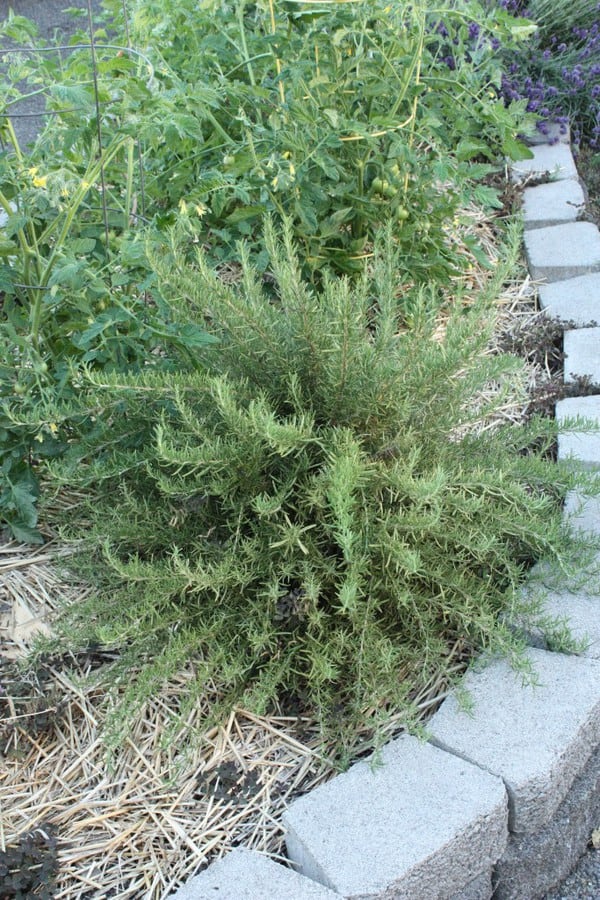 There is also a crap ton of lavender in this bed, and every single fall I trim it back, and every spring it becomes a bigger part of the garden.  Yeah it takes up a lot of room, but the honeybees are oh so happy.  Happy bees are productive bees, and so the lavender stays. 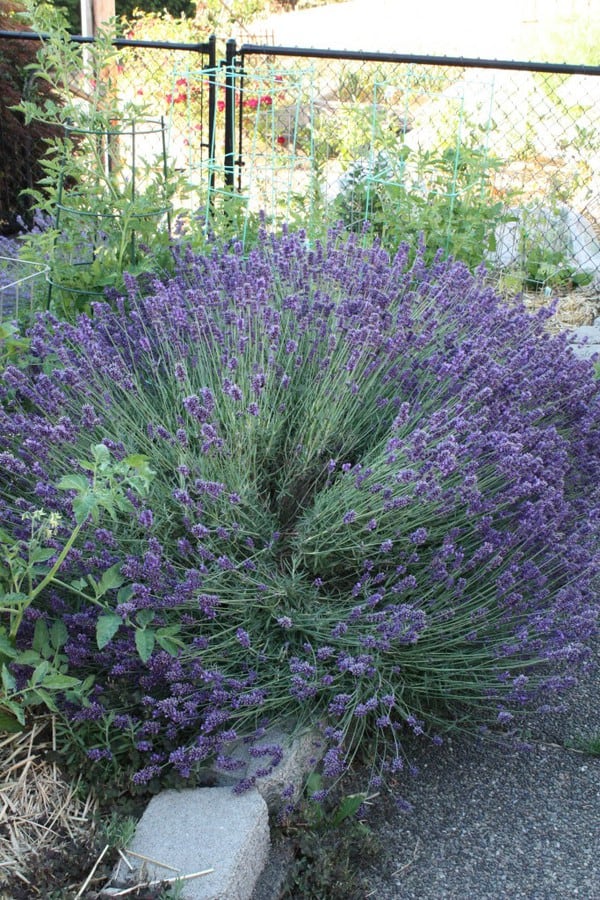 Side story: Jack and I once read an “educational” book about bees when he was three(ish).  I thought he enjoyed looking at the photos and read a few of the captions and notes and thought that was that.  A few weeks later, a wasp was in the house, and Jack was screaming for me to capture it and kill it.  I said “we don’t kill bees buddy”, and with tears streaming down his face, he yelled “but wasps don’t even pollinate”.

And the final thing in this part of the garden, are three cucumber plants that are woefully late in getting in to the garden.  Whoops. 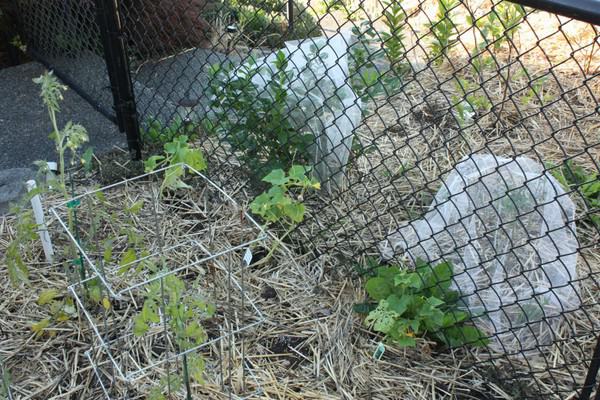 We’re up to a wonderful, amazing, and delicious 22 blueberry bushes here on the microfarm.  About 75% of them are in bloom right now, two are being aholes and aren’t going to produce at all this year, and the rest are gearing up for bloom later in July.  Super foods are delicious.  And worth the limited space.  But as my Aunt Connie said “once you pick a lot of blueberries, you realize why they’re so damn expensive in the store”.  Time consuming?  Yes.  Delicious?  Yes.

Last year I took $10 worth of bare root strawberry plants, and spread them under my mini-drawf apple trees (one is dead.  Can you see the skeleton of a stick in the middle?  Classy), and just decided to go with it.  Whenever they produced a runner, I’d shove it in the dirt in a place that wasn’t already covered by plants.  And as you can see, it was a success. 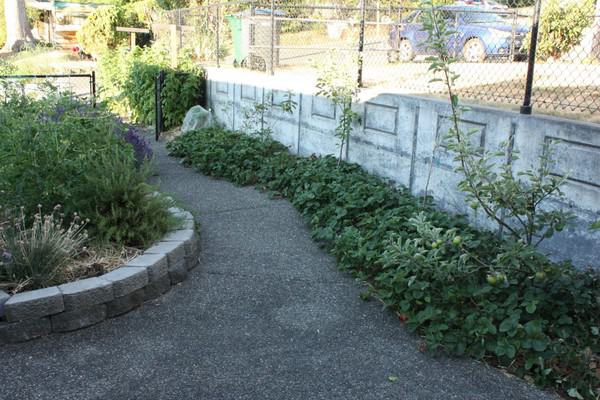 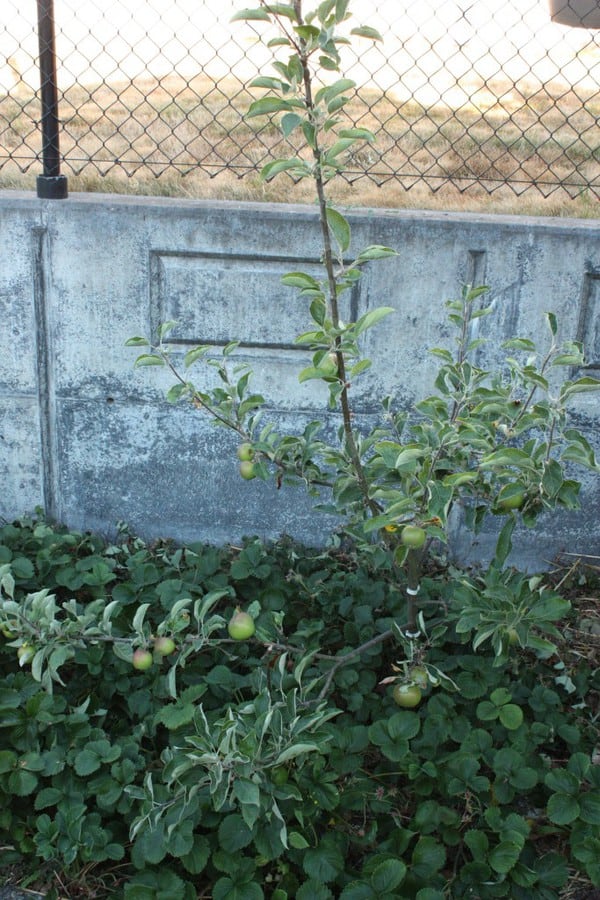 The strawbs are done now.  The ones still growing have a weird mushy middle, but the chickens love them.  And here is something weird.  The smell of rotting strawberries is like perfume.  It smells amazing to be in my front yard these days.  I kinda want to let the chickens out to eat all the remaining strawberries, eat some weeds, and fertilize the bed for next year.  The only way that would work, and I could keep them out of the rest of the beds would be if Jack and I held Minecraft swords to scare them away once they’re done with the strawberries.

The raspberries are limping along.  The first harvest is usually later in July and is always small.  The fall (September) harvest produces larger berries and a crap ton more to boot.  These raspberries are from six canes donate by my aunt and uncle a few years ago.  Of those six, three died.  The remaining three canes resulted in this: 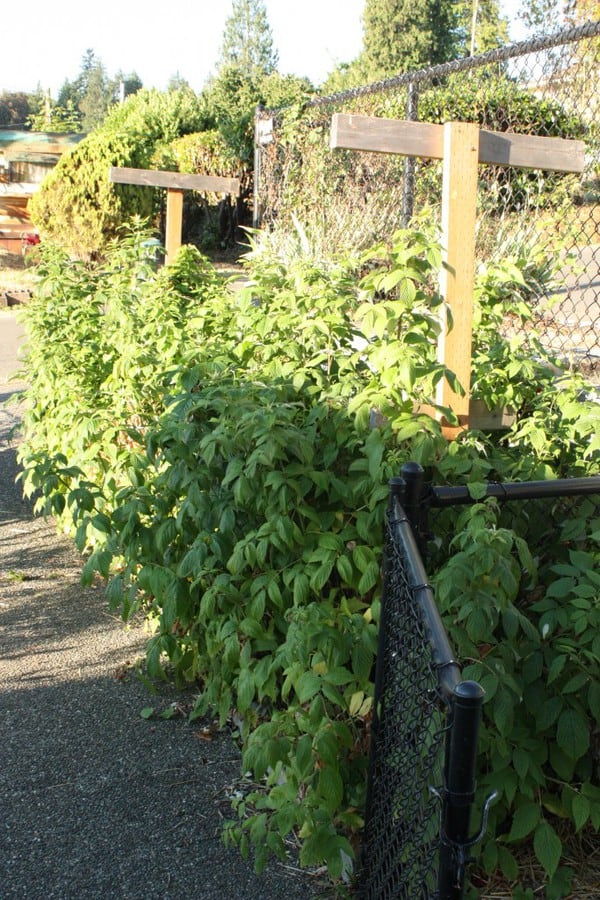 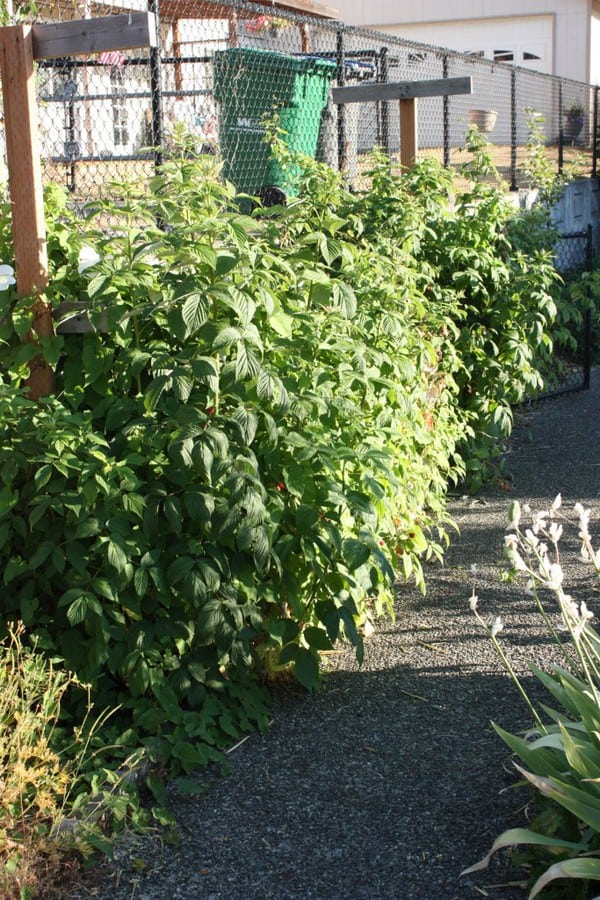 More blueberries.  More weeds.  Sigh.  Our blueberries are “going to the chapel and they’re gonna be married…”.  $11 worth of tulle (after the coupon of course!) from Joann’s is a miracle worker.  I went from 50% berry loss from birds to probably 5%.  This tulle is from last year and is still in great shape.  I’m guessing it will last a good four to five years. 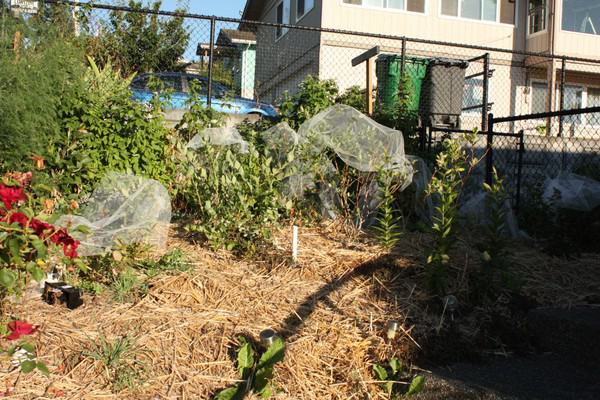 Asparagus that has gone to seed and should be trimmed back soon.  Someone get on that, m’kay? 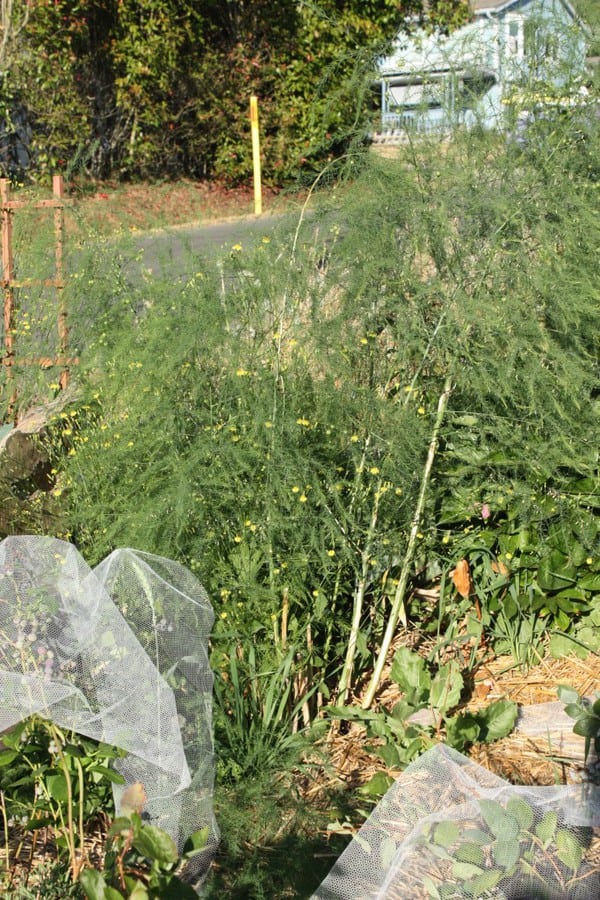 My planting boxes are a freaking hot mess.  I tried onions this year.  I don’t think it is working. 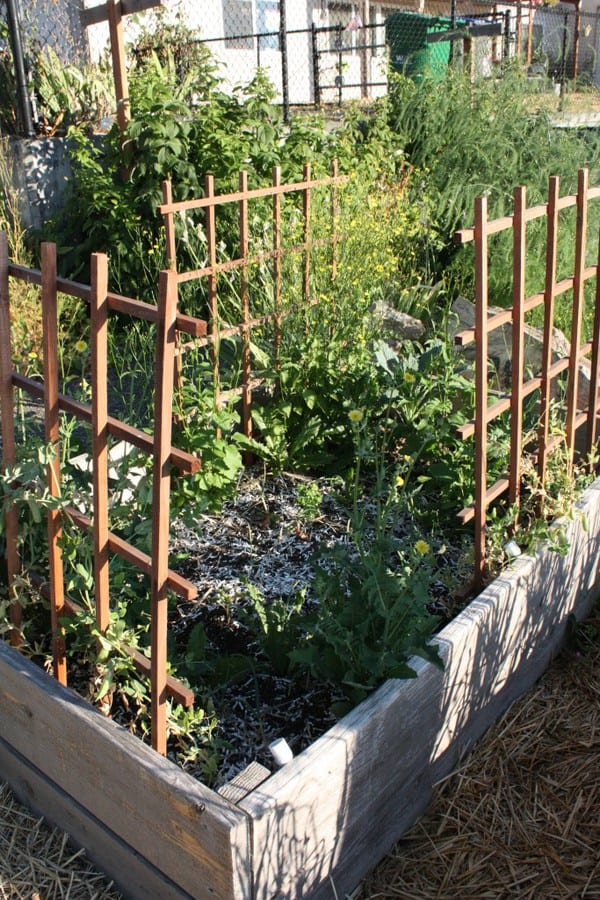 There are also dead peas in this box, and some kale which is doing fine because let’s face it, it’s kale.  The end of the world comes, and three things will survive: cock roaches, zombies, and kale.  The peas need to be cleared out, the onions are a loss, so this bed will become home to the world’s most universally offensive (to some) and delicious (to me) vegetable – Brussels Sprouts!

This box has garlic in it.  Planted last October.  It’s not dead, it’s close to harvest time.  It usually looks like this in early-August.  Hot spring and summer means everything is so far ahead.  Once I harvest the garlic, I’ll prep it for fall gardening (more kale, beets, carrots, cabbages, etc.) 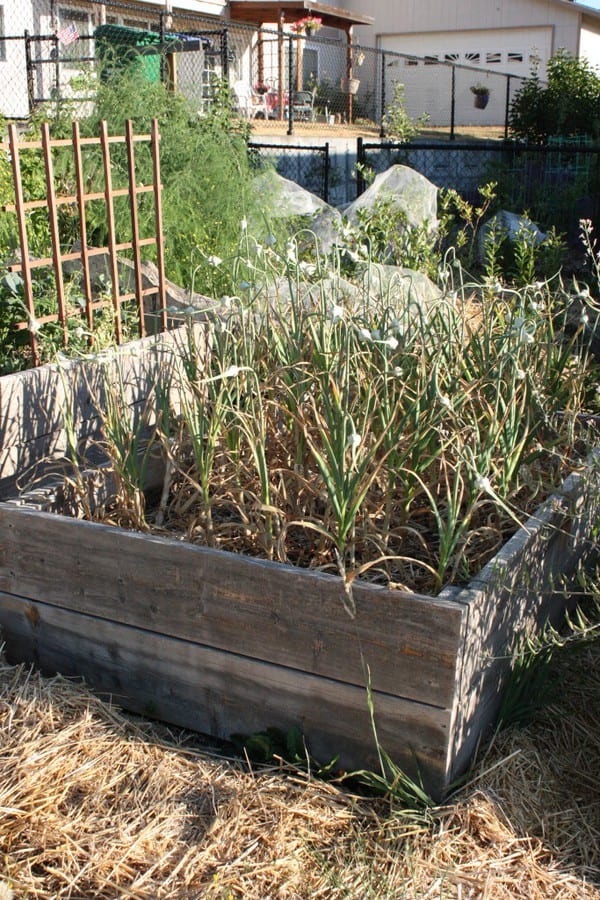 This box is well, a giant cluster of green…brown?  Peas, beets in there somewhere, and an attempt at carrots.  Not happening. 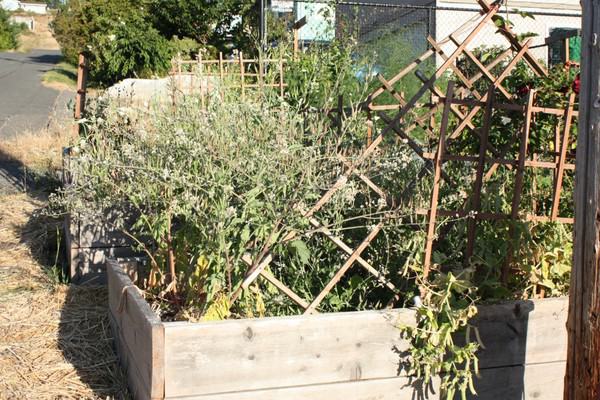 I’ll clean this out soon.  Once it stops being hotter than Tatooine outside.  Some like it Hoth.  Oh just stop.  I’ll just dump some well-tended and expertly turned compost that I am very vigilant about in there soon and leave it for fall.  It will be near year’s garlic bed.  Plant garlic people.  You plant it in fall and harvest it in summer.  And you ignore it the whole damn time.  It’s the best thing ever.

And finally, here are more blueberry bushes under our kitchen window.  And some strawberries.  And more clover.  A few years ago, this bed was full of these weird ass bushes that attracted flies (the wall behind this bed was COATED with flies in the summer) and smelled like urinal cakes in the sun.  Delicious.  I’ll have some berries instead.  Thanks. 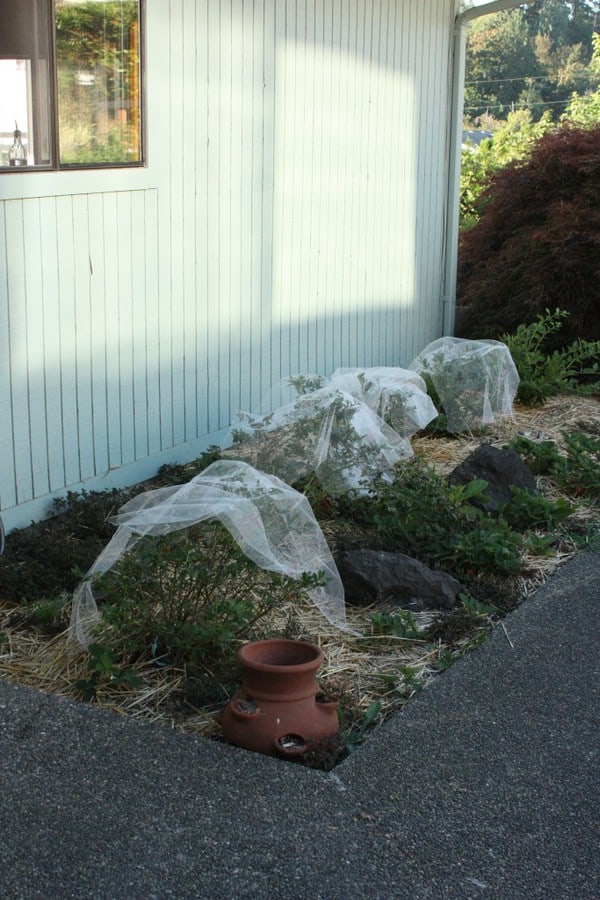 That’s it friends.  Thanks for taking a look.  How is your garden growing this year?

11 comments on “The Garden in July”