Last year during baseball season, Bennett was a wee little baby and spent every game snuggled up in the Ergo snoozing away. It was lovely, and I got to enjoy watching Jack play.

This year it is like herding a drunk cat around the outside of the field, trying to prevent it from getting hit by a ball. If I am lucky, I can watch Jack hit, and that’s about it. Troy helps with coaching, so it’s not like we can trade-off and watch Bennett so I can focus on Jack’s game for a bit.

During game two, Bennett discovered the gravel behind the bleachers, and he and the other wee siblings on the team like to play in the rocks. And by “play in the rocks”, I mean constantly hurt themselves by falling. The parents also have a great time making sure no gravel gets consumed. Rocks are delicious. At Saturday’s game, I brought a few sand toys for the kids to use in the gravel. They played with everything, but given that the bleachers block the field, it still didn’t allow any of us to watch our kids play. I decided to find a better way. And it came in the form of a $3.26 bag of sand. 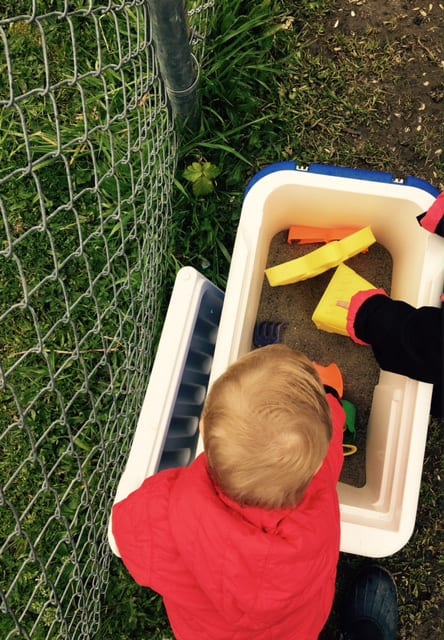 I simply took our rolling cooler and dumped a bag of sandbox sand in there, and threw in some toys. A bag of sand is 5o pounds and filled the cooler a little under halfway. It was a little cumbersome to get in and out of the car, and haul it up the hill in the parking lot (with a toddler). But I carry heavy things like chicken feed all the time, so it wasn’t a big deal. I wish I had a slightly smaller cooler, with a longer handle, but it isn’t a huge problem. 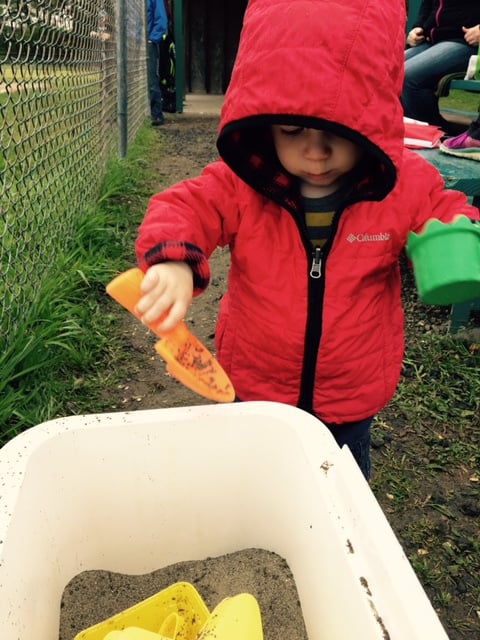 Bennett played with it for a while, but then it started raining, and he just wanted to go swing instead. The other littles played for a lot longer, but they’re girls and aren’t crazy.

If you have to keep a tiny person occupied during a sibling’s activity, I highly recommend the $3 investment in a rolling sandbox. Or go ahead and call it a mobile sensory educational unit if you want to feel all fancy pants and such. 🙂

3 comments on “The Rolling Sandbox”