They call it Labor Day weekend for a reason, right?

My plan for the weekend didn’t start out so darn crazy, but it sure ended up that way.  Because I was so sick last weekend, I was behind on everything around the house, and I had some canning to make up for. 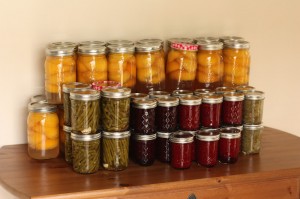 Our fruit CSA came in and this time it was peaches – 40 pounds of them.  Man, I hate canning peaches.  Like hate it.  But, we don’t get to choose what the fruit delivery is, so that’s that.  Next delivery will either be apples or pears (yay!).

Then, Jack and I went “urban harvesting” – gleaning – around the neighborhood, and got about 40 pounds of apples, 15 pounds of plums, and 10 pounds of blackberries.  The blackberries are at the end of their season, so they needed immediate attention; they were much too mushy to freeze.  Usually I prefer freezer jam, but a) I was out of freezer jam pectin and b) we’re going to be defrosting the freezer shortly, and I didn’t want to have to find space for one more thing.  So, enter a quick jam.  I used the recipe for Quick Raspberry Jam from Put Em Up.  And it was so easy, and I already had everything out, that I decided to make some with actual raspberries that I had in my freezer.

My pickling cucumbers in the garden were getting large, and needed picking as well.  I made some pickles, and I also made five half pints of dill relish from Ball Blue Book of Preserving.  I loved it (so did my friend Kat who was my official taste tester), but Troy thought it was too vinegary.  What does that guy know anyway?

Then Jack and I were at the farmer’s market, and this nice little old lady was selling green beans that were beautiful!  I bought a “Macy’s bag” (that is an official measurement) amount of dilly beans using the dilly bean recipe from Ball Complete Book of Home Preserving, but I am nervous about how they’re going to turn out.  The recipe called for them to be boiled in the brine, and I just get the feeling that they’ll be mushy.  The original Ball Blue Book calls for a raw pack (putting uncooked beans in the jars and pouring hot brine over them), so I’m definitely going to try that next time. 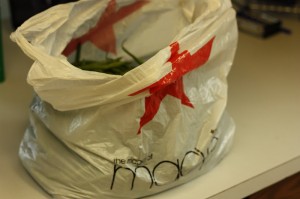 Things that await me this week?  The plums and the apples.  Oh, and the pickling cucumbers are getting huge again in the garden.  Of course all summer nothing has been growing, but now that I’m working late each night and am canning everything in sight, they choose to ripen.  Naturally.

How about you guys?  What are you canning up these days?

22 comments on “They call it Labor Day weekend for a reason, right?”