We have a joke in our family that when it comes to contests, I couldn’t win a jar of free air.

If there was a contest for who is the tallest blonde woman named Sarah writing this blog, I’d lose.

So, at work, when they announced that everyone who helped to proofread a huge document/report would be entered to win a big drawing, I knew I didn’t have a chance. I helped anyway because that is the right thing to do, but you know, it wasn’t happening.

Well, you could imagine my surprise on Tuesday when they did the drawing in front of the whole company, and I won!

What did I win?

Let’s just pause right now and think about that.

The funny thing is, I don’t actually like Apple products all that much.  I have an old (free) iphone and an ipod nano (gift from my inlaws in 2009), but other than that, whatever.  Troy has an 8 year old Macbook Pro that I avoid with a 10 foot pole.  What it really comes down to is that I’m not cool enough for Apple products.

Since I didn’t have any technology needs, I purchased a new iphone5s and an ipad2, both for Troy.  He currently lugs his big ole’ laptop around to his various jobs, and now he can take the ipad for watching movies, checking email, etc.  With the iphone, he and Jack can Face Time which will be pretty cool.  And I still have $9 to spend at some point!

So maybe all those years of not winning were just adding up to this?  I’ll probably get hit by a truck tomorrow.

In all honesty, the gift card was perfect timing because the entire week was a suck fest of epic proportions for a variety of reasons.  I’m glad it is Sunday and the start of the new week.  I’m determined to make this one better.

Tuesday I had to work over 11 hours, so Troy had to take care of the chickens in my absence.  I came home to find 6 eggs in a bowl in the fridge.  6!!!!!  I was so excited, because we usually only get 5 per day.

You could imagine the look on my face when I realize that one of them was one of the fake eggs that I had put in the nesting boxes months ago to try to encourage the ladies to lay.  I guess it is real enough to trick chickens and 36 year olds.

Saturday, my nephew came over to spend the day with Jack and I.  It was supposed to storm, but the weather turned out to be wicked nice, so the boys and I spent some time at the beach. 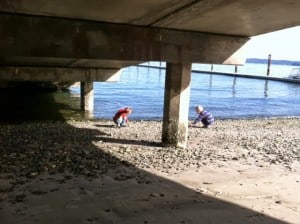 This was the first time they have hung out together where there were no huge fights, injuries, or hurt feelings.

Wednesday:: More enchiladas, beans, and spanish rice from the freezer.

Thursday:: Dinner at my in-laws

Saturday:: I’m thinking homemade Reuben sandwiches, with green beans on the side.

This week I spent $3.50 at the farm for raw milk, $48 at the local butcher (that bought me two bags of chicken breasts, 2 pounds of bacon, and one pound of their awesome breakfast sausage), $7 at the farm stand for fruit (this is their last week until next June.  Sob), and $16 at the grocery store.  We’re headed to Costco later today and I’m going to spend $7 for two loaves of Dave’s Killer Bread.  Remember how I said my week was a suckfest?  Well, I totally forgot to start the dutch oven bread on Thursday night for the bread that I make for communion.  In a pinch, I grabbed my last two loaves of homemade whole wheat bread from the freezer.  Total duh moment.

What is your family having this week?