Damn you cute Target sweater.  Damn you to hell!

Let me step back for a second.

For anyone who knows me in real life, or has read this blog for any period of time, knows that I am a terrible sleeper.  Always have been, sadly probably always will be.  Pre-pregnancy, I would take (generic Target brand) Unisom one to two times per week just to ensure at least a few nights of z’s.  While Unisom is reported to be safe during pregnancy, I am really set against taking anything this time.  I took a combo of Unisom and vitamin B6 (with approval of my OB) while pregnant with Jack.  And he turned out to be amazing, and kind, and smart…and crazy.  So this time around, I’m taking zilch.  And am very tired.  If I sleep more than 90 minutes at a time, I consider that a good night.

Troy was at work on Wednesday, which mean I had the bed to myself.  I was off on Thursday, and had an amazing combination of the best night of sleep I had in months (waking only four times), and the ability to sleep past 4:30 am.  That morning I was able to get two hours logged in to the garden, had an amazing behavioral report from Jack’s teacher that left me wanting to cry happy tears, I had an adorable new sweater, lunch with two dear friends I hadn’t seen in months, and finally a midwife appointment.

After months of puking, very low blood pressure (hovering at 90/60 for nine weeks), and weight loss, my appointment was kick ass.  My BP was at 110, no puking for weeks, and I had gained 3.5 pounds, finally putting me over my pre-pregnancy weight.  His kicks were so strong that he turned off the Doppler twice during the exam, and was measuring over a week ahead of my due date. My midwife and I high-fived each other, and I stepped out in to a gorgeous fall day feeling so happy and full of joy.

And to share my joy, I posted the following photo on Facebook with the caption “six months (yesterday) and feeling pretty darn great”.  Oh my friends, I was, I was feeling so darn great! 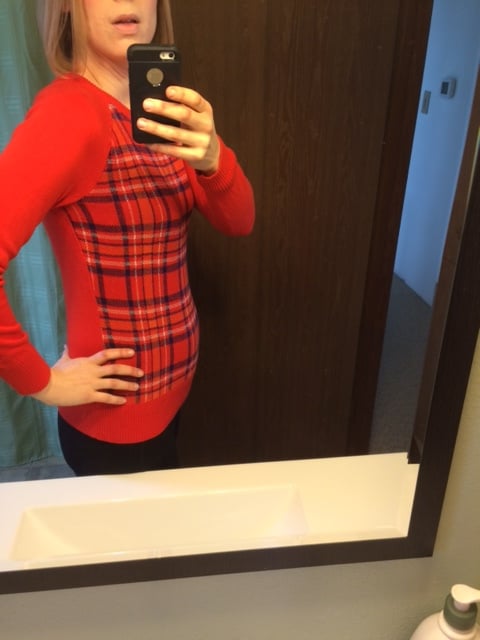 The headless belly shot is super weird, I get it. But my mirror is low and it’s hard to get everything, including my upper face in with my stomach.

Friday morning, someone decided to poop in my Cheerios by commenting “Do you eat anything?  Is it good to be thin when ur pregnant”‘?

Blerg.  When pregnant with Jack, I was so sick and lost so much weight so quickly, that when I finally told some people at work their reaction was “oh good, we thought you had cancer”.  I couldn’t keep anything down until I was 23 weeks pregnant with that boy.  He was born at 8.5 lbs, and so strong that we quickly gave up trying to support his head and neck because he kept looking at us like “I got this people”.  When he was a baby, he was diagnosed with a dairy allergy, which as a someone breastfeeding meant no dairy for me.  I rapidly lost more weight when I cut dairy out of my diet, and I’ve talked about it on here before that I felt awful.  I was so gross looking; too thin, flat/dull (er than normal) hair, and it was just nasty.  That is what started my journey to healthier eating and part of the foundation of this blog; eating and nourishing your body.

Anyone who has been sick, really sick while pregnant will tell you they never again take the deliciousness of food for granted.  They savor it, enjoy it, and love the act of eating food and keeping it down.  And that is why this person’s comment threw me off so much.  Whatever she intended it to mean,  it implied to me that she thought I was putting vanity above the health of my child.

The exchange between us continued (me later accusing her of body shaming, her accusing me of posting on Facebook flaunting how thin I was), included a few other readers, and basically ended with me saying “I’m done” last night and going to bed.

The fact of the matter is, it wouldn’t be appropriate for someone to tell me I was too heavy and question whether or not my food choices were adding too much weight and putting my baby at risk.  No one should glorify thinness in pregnancy, but healthy and strong should be paramount.  Strong and healthy means so many different things to different people, and your ideal doesn’t get to dictate what my medical team views as “right on target”.  No matter any pregnant woman’s size, it’s not appropriate to question their choices (excluding of course drug use!).  The safest thing to say (if you know 100000000% that they are pregnant, because that opens a whole different can of worms!) to a pregnant woman is simply “you look great.  Congrats”.  Looking heavier, looking thin, or looking totally on track, doesn’t meant that person isn’t making amazing and healthy choices for their baby.

When I was pregnant with Jack, Troy and I did The Bradley Method childbirth classes. It is a series of 12 classes over three months, and one of the things stressed in the very first week is the sheer amount of protein they recommend you consume.  100 grams a day is your target, and let me tell you, that is sooooooo much protein.

I’m not a doctor and I am not giving medical advice here, but 100 grams a day is what I was taught.  My midwife this time around recommends 50-75 grams a day, which is much more doable in my opinion.  I’m going to list my daily intake below.  I don’t want this seen as a reaction to the exchange I had with the Facebook person below, because that would mean I am justifying my choices.  Justifying implies that I have done something wrong, and feeding my baby healthy food is never wrong.  Rather my intent to share is to show how little choices throughout your day can make your meals both delicious and healthy.

Breakfast #1 4:30-5 am (blech)
Every morning I have a 16 oz homemade hot cocoa.  It’s very little actual chocolate (maybe 10-20 milk chocolate chips melted in milk, and sprinkled with cinnamon) because I am very sensitive to caffeine, and too much sugar in the morning makes me feel like I’ve been pounding Mt. Dew.

The cocoa is made with whole, raw, or 2% milk.  Growing up, we only ever drank non-fat milk.  I thought milk was supposed to be watery and light blue.   I remember having dinner at a friend’s house in sixth grade.  I drank the milk they put on the table, and asked “is this melted ice cream”?  I was informed it was something called “1% milk” and my life has never been the same.  Non-fat milk makes me sad.

With my cocoa, I have an “everything” bagel with whipped cream cheese and copious amounts of smoked salmon.  There is a guy who lives in my house who makes the world’s most amazing smoked salmon.  I call him dad.  Having all those filets at my disposal is heaven.  And an apple on the side, because this is Washington and it’s fall people.  Apples are king!

Breakfast #2.  Also know as “Elevensies” 8:30-9 am
A string cheese, and a Greek yogurt.  And a handful of candy corn, because it’s fall and candy corn is the business.

Lunch 11:30 am
Leftovers from dinner the night before.  You all see my meal plans, you know what we eat for dinner, plus cut up carrots and celery.  And um, more candy corn.

Dinner between 5-6 pm
We post our meal plans, so you know what we eat, but it always includes a protein, usually a starch, and often veggies.  Just like when pregnant with Jack, many veggies and I are not great friends.  Greens for the most part make me want to gag.  To get around this, I often serve “liquid salads” with dinner, which is a smoothie made with OJ (calcium!), more Greek yogurt, frozen fruit, and huge handfuls of spinach.  Because like a three-year old, or a dog who needs a worm pill, I need my greens hidden to consume them.  Now that it is fall, roasted veggies are doable (I can use the oven without hating the world) and I will happily gobble up sweet potatoes and roasted Brussels sprouts.  I will eat copious amounts of soup, so any soup I make usually includes loads of veg.  Except kale in potato soup because no.  Greens.

Dessert some time before bed
I have a few slices of Tillamook cheese with rosemary crackers.  And then most nights I have three to four medium scoops of ice cream.  The flavor changes occasionally.  I was really in to vanilla with homemade fudge sauce and peanuts for a while.  Now, Tillamook’s “Malted Moo Shake” is the king of my heart.  I highly recommend you look in to it.  I don’t even like malt, and this ice cream is like crack!

Now that I am in the second trimester, killer leg cramps are showing themselves at night.  To combat this, I’ve been having a few kiwi with my bedtime snack.  Kiwi are full of potassium, and I don’t like raw bananas.

Liquids throughout the day include a gallon of water, an 11 oz coconut water (to get more potassium), and a can of sparkling water at lunch.

Plenty of protein, plenty of good fats, and while I don’t count calories, I’m always satiated – rarely hungry, and never feeling so full it hurts.    That feeling that people get on Thanksgiving when they think it is their job to overeat?  Yeah, I refer to that as “gross full” and I hate that feeling.

Pregnant or not, it is totally easy (with planning!) to make sure your day includes a balance of healthy food and some sweets and treats.

Now, go forth, be healthy, be happy, and d0n’t make it a habit of questioning others health and diet.

Oh, and get yourself to Target for my cute sweater.  It’s fall, and everyone needs something orange and tartan-y.  Even if said sweater starts a Facebook clusterf$&k!