Cooking certain foods can make your house reek.  Cabbage, Brussels sprouts, bacon, and fish all make my house odoriferous.  The cabbage and Brussels sprouts let off an odor when being cooked, and also about six hours after being consumed…

This is a tip that is a cinch to implement and has cleared out any smell that I’ve wanted to banish from my home.

Put everything in a pot and and simmer on the back of the stove until you can’t smell whatever you’re trying to get rid of. 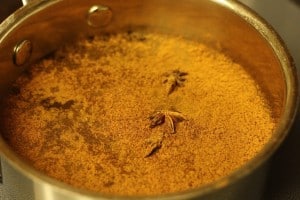 If the scent isn’t within wafting distance of your kitchen, you can put this all in the crockpot on low in your room of choice.  If using a crockpot, increase the amount of water.