I’m not sure if the task of thinning and replanting strawberry plants really should take place in the late spring, or if it is just pure inertia on my part. Regardless, I walked outside in March, and realized my strawberry patch was out of control. Runners were everywhere, and I could barely see the ground between the plants. I had contemplated thinning the strawberry patch last fall, but frankly was unsure how to do it. I was worried that changing anything would impact our harvest this year, and so rather than investigate, I did nothing. Solid plan.

Thankfully, mother nature was determined to force my hand. I recently noticed tons of dried runners/dead portions of berry plants, and decided to be proactive in saving this year’s berry crop. We take fruit and berries very seriously in this house, and I would have some angry family members if I let the plants die. 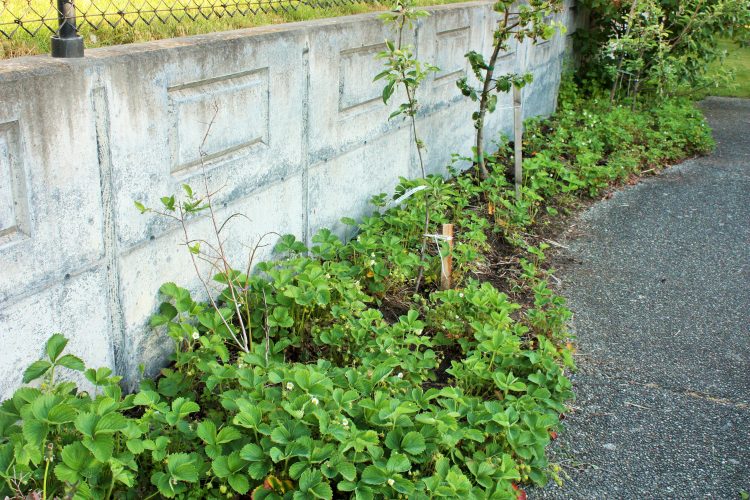 We planted 25 bare root strawberry plants along with some mini drawf apple trees from Raintree Nursery back in 2014. Awww, they were just little baby plants back then. 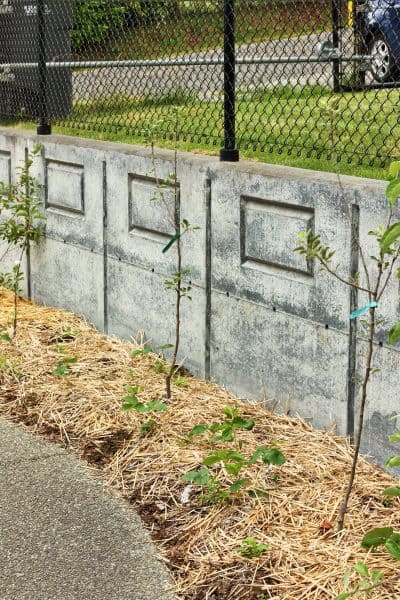 One year later, and they had gone insane with growth. And if I remember correctly, almost half of the original 25 plants had been ripped up by the chickens in that first year. Most types of strawberries produce what are called “runners” throughout the growing season. A plant’s desire is to produce offspring. The runners allow plants to send off shoots to become new plants. If left alone, you’ll have new plants. If directed with intention, you’ll have new plants where you want them. 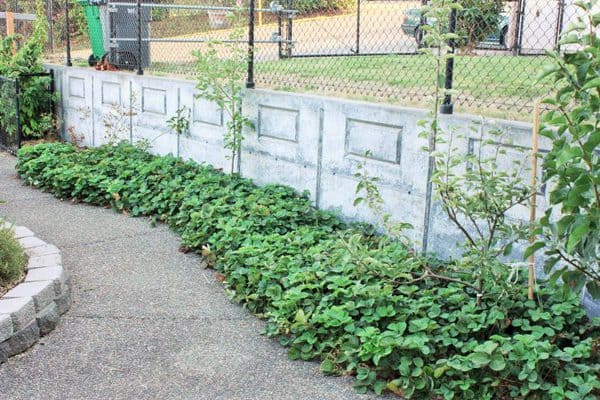 I started by clearing out the easy to yank and most obvious weeds. That showed there were huge empty patches, and thus an opportunity for thinning and redirecting some of the existing plants. Once I got the easy to remove weeds, well, the real “fun” began. I removed all the dried parts of the runners and the little weeds, along with the red clover that is tied with morning glory for my garden-related wrath. In many cases when I was removing the dried debris around the plants, the whole plant would come out of the ground. After freaking out the first two times it happened, I decided to embrace the opportunity for renewing the patch. Each time a plant came up from the earth, I set it aside.

Once the whole area was cleared of weeds, I took the chance to take a holistic view of the strawberries. I saw places that were totally almost bare earth, and still others that had such a high density of plants that I would be challenged to pick all the fruit once it ripened. Starting with the barest areas, I replanted the ones that had come up during my weeding. The soil is pretty loose, so it was just a quick dig with my hands and then I placed the strawberries in the shallow hole. I covered the roots with soil, and went and planted another within about six inches. I continued on until the bare sections looked like they were filling out. Knowing that within a few months, those plants would also be sending out runners, I wanted to be strategic about placement. 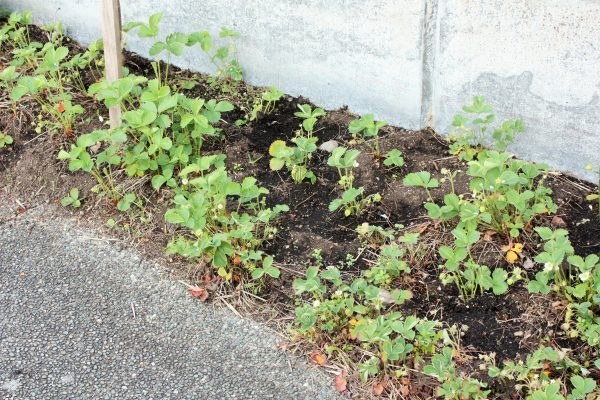 When those plants do start sending out runners, it is very easy to direct the new “starts” where you want them to go. Basically, I wait until the runner has a set of green leaves (almost still in a closed bud), and then I just stick that about 1 inch deep in the dirt where I’d like a new strawberry plant to start growing. Within a few weeks, it will have established itself as a whole new plant.

If you’d like to transplant runners in to another section of the garden, that is also a simple process. Take a plastic cup, and punch a drainage hole in the bottom. Fill it with dirt. Put the end of the runner in the cup, and cover gently with dirt, and make sure to keep it watered. After a few weeks, snip the runner from the original strawberry plant, and transplant your new start elsewhere in the garden. 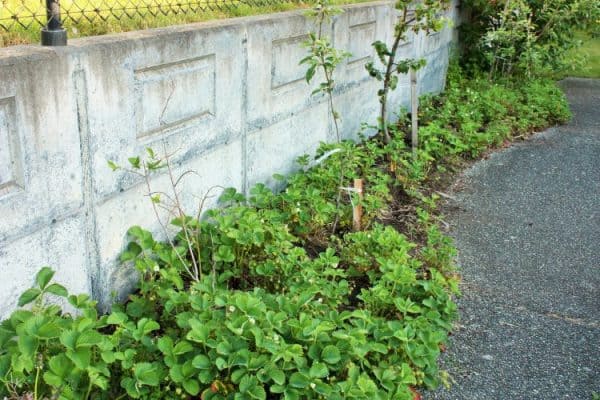 After all the orphaned plants were re-homed, I gritted my teeth, and heavily watered the newly planted sections. My dedication to low-water gardening goes back years, but new plants and hot weather were not conditions for success. You can ignore established plants, but you have to do some watering to earn that “established” label. I have continued to water these new starts for the last week, and will likely keep up the routine for another few days. 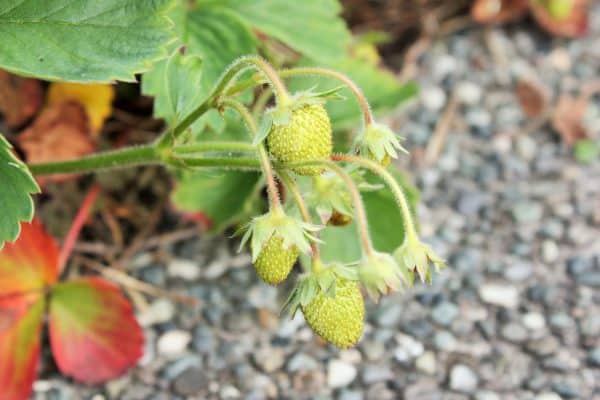 I had a realization while pulling up weeds. Weeding inspires deep thinking. One, red clover has little seeds that like to pop up and get stuck on my face. And two, despite the rainiest spring on record, the soil in the strawberry patch was super dry! The rest of my garden has lovely lush soil thanks in part to my steady stream of composted chicken manure. Maybe it was the density of the plants before, but for some reason I had not been fertilizing this section of the garden. Even though I use aged chicken manure, I hesitate to put any on ground plants that are currently producing food. Please, please, please someone remind me in mid-July when the strawberries are done, that I need to fertilize the strawberry patch. I’m holding you to that.

Did thinning and replanting strawberry plants impact my harvest this year? Potentially, but I know that had I done nothing, more areas of the strawberry patch would have continued to die back. By being (finally) proactive and purposeful in replenishing my plants, I think we’ll see huge dividends next year.

Do you clean out your strawberry patch every few years, or just let it go wild?