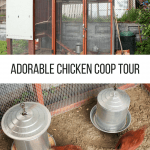 Chicken coop tour of an adorable homemade coop full of charm and built with salvaged materials. This cute chicken coop has so much personality. 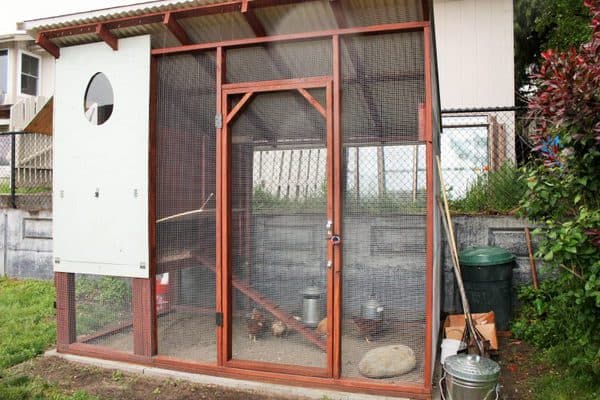 My father-in-law dubbed this the Taj Mahal of chicken coops.  I wouldn’t go that far (I’ve seen a chicken coop with a chandelier in it), but I love it with all my heart.

We live in a neighborhood with very small lots. I live on less than one-fifth of an acre. Since the houses are so close together, many various neighbors would have this coop in very close proximity to them.  Also, our town doesn’t have any laws about chickens, and I didn’t want to put up something that would cause them to create some!  Basically, I wanted this to be visually pleasing, and neighbor approved.

Also?  I wanted to be able to stand up in this thing.  I’m 6 ft tall and didn’t want to be stooped when cleaning.

The chicken coop is based on this design, and we stayed pretty true to it. The original link has better building step by step photos. 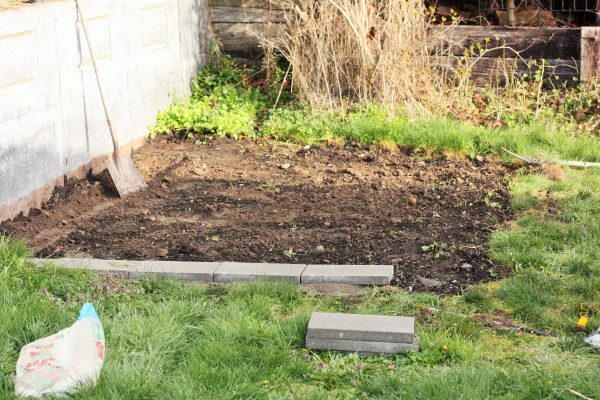 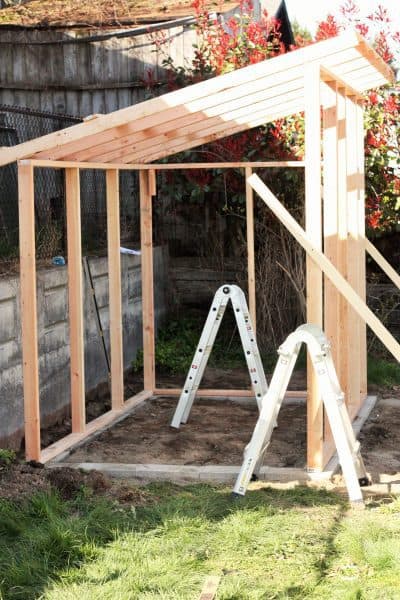 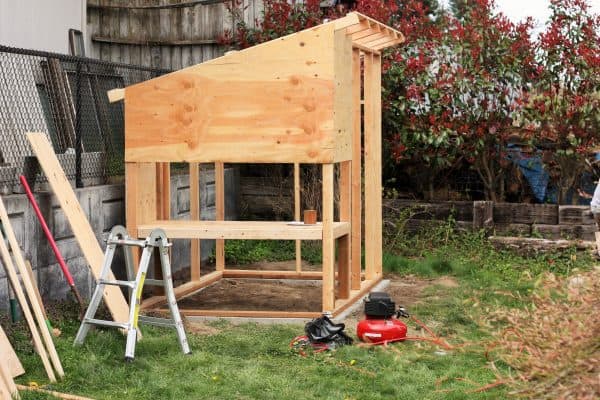 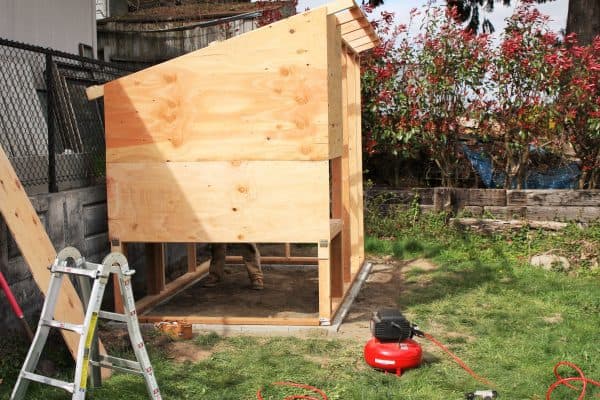 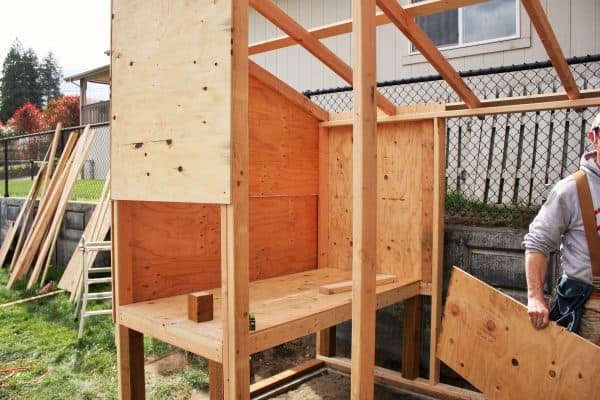 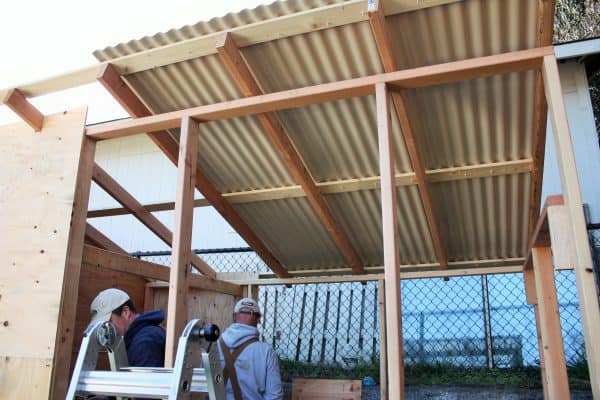 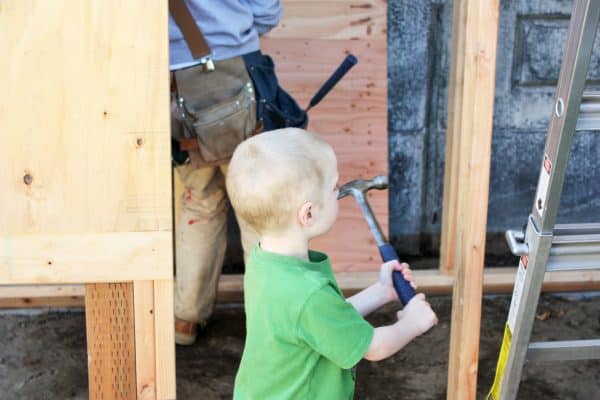 After what seemed like months (because it was months), the coop was done. Please come in! 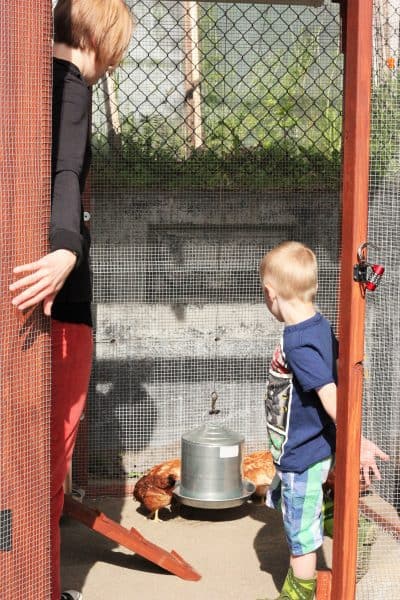 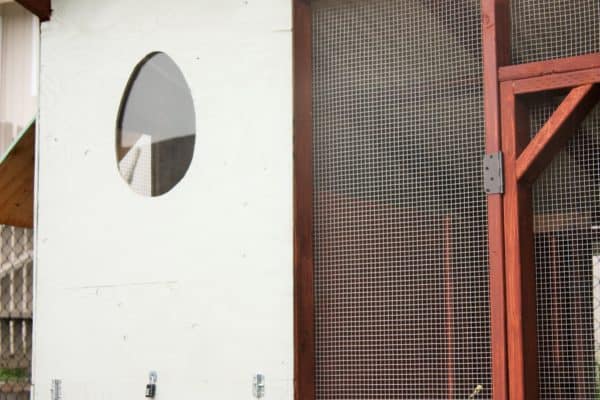 Troy found a piece of free plexiglass and built an egg window. 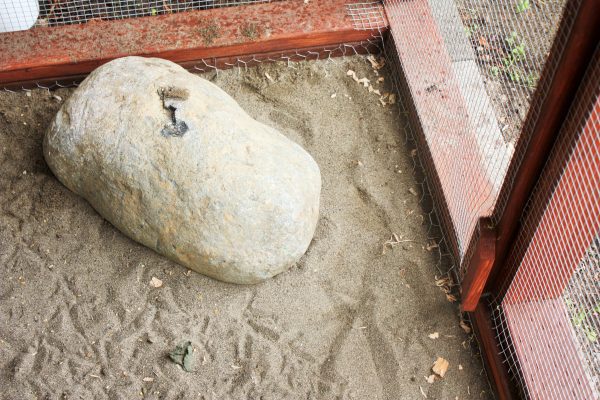 He pulled a rock from the weeds in the side yard, and added it to the coop for a chicken “zen garden”. 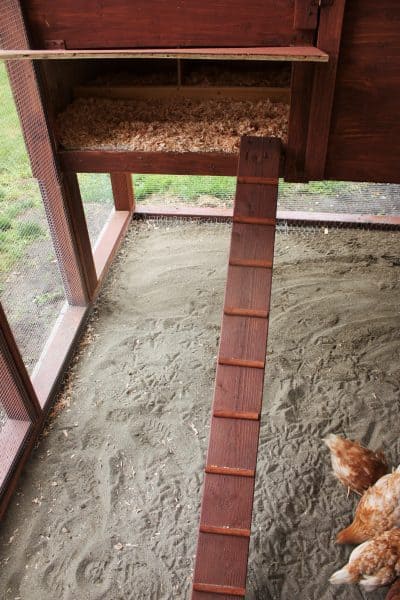 Instead of spending time digging a trench to bury hardware cloth around the coop to prevent predators from tunneling, we got smart and just laid it across the floor and attached it to the floor beams.  Troy used an air compressor to do all the stapling and said that if a raccoon can pull those staples out, he deserves to eat a chicken.  Ahem.

The floor is sand so that I can just rake it to clean up the poop.  Kind of like a giant litter box.  We are in a rainy area, so the idea of sand was appealing as it drains well and fast! Update 2017: We have since added a “deep litter bed” method to the coop floor with a mix of white shavings (cedar isn’t safe for chickens) and straw. It all sits on a base layer of sand.

The paint is leftover green from Jack’s room, mixed with leftover white from god knows where.  The stain on the beams is leftover from when we stained the deck last summer.  Almost all the latches, hooks, and hardware was free, thanks to my dumpster diving spouse.  Many of these things came from movie and TV sets in Los Angeles, back when we lived there and Troy worked on various projects.  At the end of each production, the odds and ends would be thrown out.  Troy was always happy to take them instead of letting them be put in the trash. 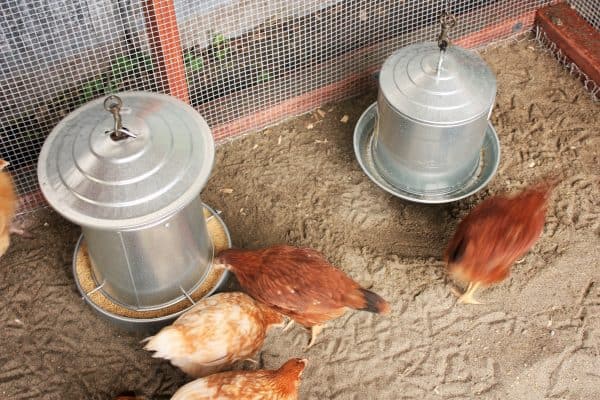 Total cost?  I have no idea.  Probably about $600ish.  I’ve been saving my garden budget money ($30 a month), and I used every rebate we’ve received in the last year.  This is the coop that contacts, fridges, and energy upgrades built.  The most expensive items were the hardware cloth and the gutter system that Troy really wanted.  All the work was done by Troy and my father-in-law.

Chicken Details
I started out wanting mainly Buff Orpingtons, but I ended up with only one.  Due to Troy’s allergies to anything adorable and covered in fur or feathers, we couldn’t do a brooder with baby chicks (boo).  I found a local farm that raised their chickens organically and had coop-ready pullets for sale.  You just had to roll the dice that they had something you wanted.

What I got was one Buff, and five Golden Star (two of those goldens are gingers, i.e., redder goldens).  The two breeds are known for their friendliness, and the Stars are egg laying machines.  All my girls are about 10 weeks old and should start laying in about two to three months.

They’ve yet to realize there is a nesting and roosting area in the coop, and they sleep in a little pile of chickens on the floor in the corner.  Silly birds. 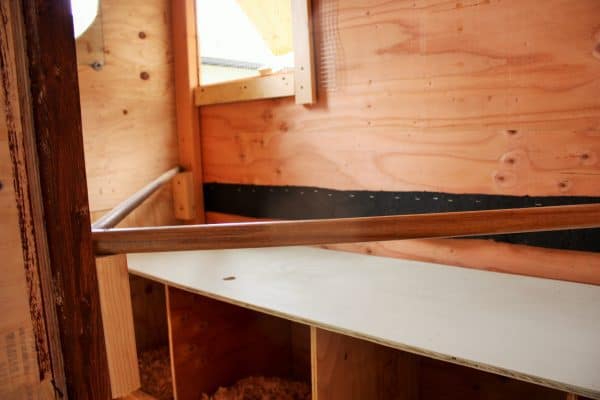 Roosts built with the handles of old brooms that Troy found.

Shall we meet the ladies?
In a rookie move, last year we told Jack he could name two of them.  Really, giving carte blanche to a (then) three year old was pretty stupid.  Two that he named: Poo Poo Sandwiches and A Chicken Knocks on a Door, whaaaaaaaaaa?. We also have: 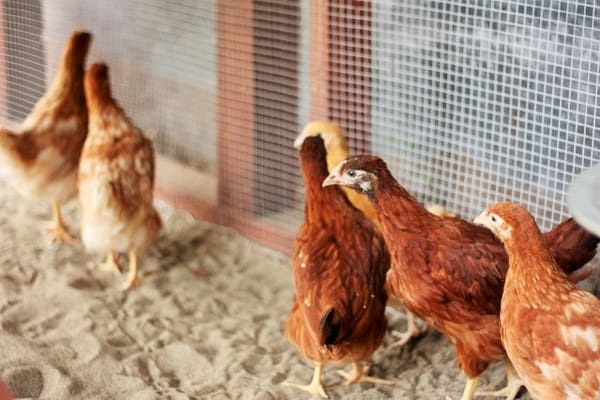 The chicken coop was a two-year dream for me and took months to complete because of Troy’s crappy work schedule, but it was so worth the wait.  I’m so pleased and overwhelmed to finally be a chicken owner. They provide us with eggs, compost, and so much entertainment.