Once a month, I share really stupid confessions that are honest and not shall we say “fake perfect blog” appropriate.

Let’s start off with something that I am sure will be controversial.  Shall we?

If we can find pants long enough, you can too shortie.  No freaking flipping excuses!

I had a roommate for years who was like 5 ft 1.  She had a problem with not being able to find pants short enough, so she would buy pants, and then pay $10 to have them hemmed.

NO EXCUSES.  BUY PANTS THAT ARE LONG ENOUGH FOR YOU.

2) I am convinced that Troy has my phone bugged and has hacked in to the face time feature and can literally spy on me so that he can only call me at the most inconvenient time.  There is simply no other way to explain how he only calls right after Jack and I get home and my arms are full of stuff, and Jack is hungry and whining, and my head is going to freaking explode because I’ve been up since 4:30 am.

Also, he has been known to call multiple times if you don’t pick up, so not only does he call at the worst possible time, but if you don’t drop everything and answer, the stupid phone just keeps ringing.

3) When I worked at my last company (corporate), once a year they would ship us somewhere lovely for a regional offsite.  The very first year I was at the company, they sent us to Cabo.  Rough life, right?

Well, I roomed with someone who was dating one of our coworkers.  Being super lame like I am, I called it a night by like 11 pm, while everyone else was enjoying the free drinks.  I have a thing where I need to fall asleep while watching TV.  I showered (cause it was like 567 degrees and humid), and then turned to it on to the movie channel (Out of Time with Denzel Washington), and promptly fell asleep.

The next morning at breakfast, my roomie and her boyfriend asked me how my night was.  I said it was pretty good, I took a shower, I watched TV, and fell asleep.  They burst out laughing.  I was a bit perplexed, and then had to wait until they stopped choking on their huevos rancheros to figure out what was so dang funny.

To this day, I’m pretty sure neither of them believe my story, but I swear it is the truth!

4) Unless I am measuring liquids, I almost never wash my measuring cups and measuring spoons.  Salt?  Flour?  Baking soda?  It’s called knocking the cup or spoon on the side of the container and putting it back in the cupboard or drawer.

6) From the time Jack was three, until a few weeks after turning four, I was convinced he didn’t really have a soul.  Three year olds are evil hell beasts.  I want another kid, but I’d love to ship them off when they turn three, and pick them up at four years and two weeks.

7) There are times when the weather outside is gross, and I’m feeling lazy, and I’m oh so tempted to just make a bag of Top Ramen.  Top Ramen was a childhood staple, and even though it so so full of sodium and crap, I can still taste the deliciousness.

8) I don’t know how to BBQ, but I also don’t want to learn.  Grilling is the ONE thing Troy will do in the kitchen, and it feels like a cooking vacation for me.

9) Jack’s preschool work gets put in the recycling every Sunday night.

That’s right, I said it.

This week, he had a picture made by his friend Cooper, and he said very conspiratorially “mommy, I just want to throw this away”, but I gave him a guilt trip about how it was something special and we should keep it.

I talked him out of putting in the recycling, because HIS stuff was right at the top of the bin from where I had chucked it the night before.

10) I am TERRIBLE at alphabetizing.  When I’m filing my client’s paperwork, I have to sing the ABC’s in my head, because after I get to “h”, it is kinda a blur.

11) I am terrified of this space between my counter and my oven. 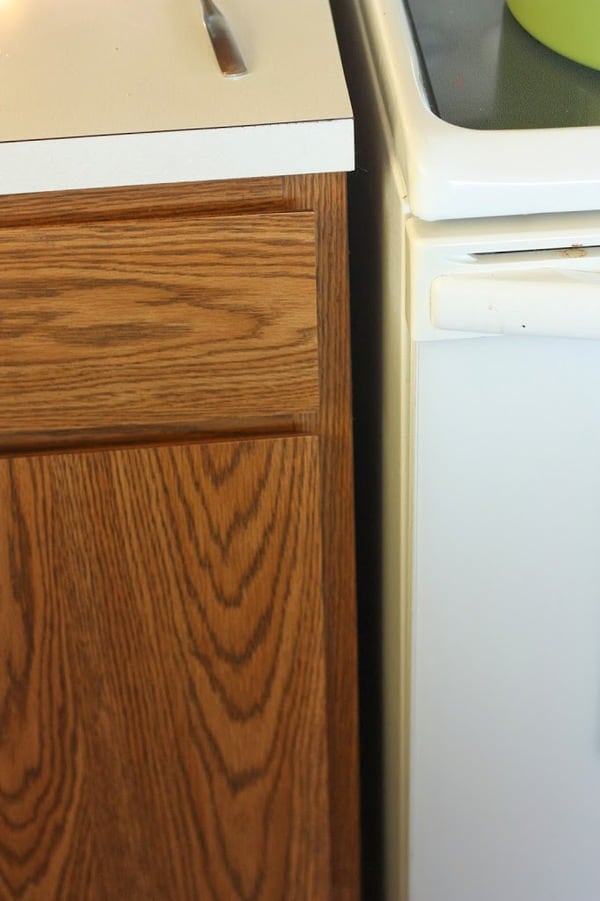 God only knows what is in that crack.  Should our oven ever break, I’d rather grill (well have Troy grill) for the rest of my life, than have to move the oven and see what hell spawn has thrived in that dark and inhospitable environment.